For the enhanced Trust Magic version of this NPC, see Trust: Zeid II. 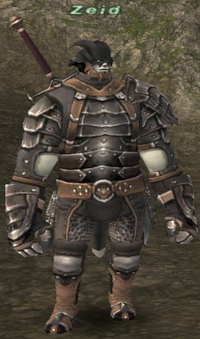 Zeid (Hume-given name War Cloud) is a member of The Mythril Musketeers and holds the rank of "Number Two," though he has been missing since shortly after the end of the Crystal War. He is known for seeing the potential in adventurers to control the dark arts, and is therefore your main contact in the Dark Knight quests.

Zeid is one of the champions that originally defeated the Shadow Lord (who was a friend of Zeid's prior to being taken by darkness). Zeid appears numerous times, both as a heroic figure (Rise of the Zilart Missions) and as an adversary (final Bastok Mission). Throughout the Bastok storyline, Zeid is upset that Volker received all the credit for defeating the Shadow Lord and ending the Crystal War. In the expansion, Zeid works with you, Aldo, and Lion to stop the Zilart prince's plan to open the Gate of the Gods and enter Paradise.

Sole survivor of the massacre of the galkan-only Thirteenth Regiment at Hoarfang in C.E. 857. After carving the number 13 in his forehead, he swore to exact revenge on the hume patrol unit that could have aided and prevented the massacre. Hence the assassin named Darksteel Hurricane came to be. A year later, captain Klara would save his life, thus showing him not all humes shared the racism towards galkans. She allowed him to serve her and the Mythril Musketeers to make amends, under a new name: Zeid.