Upgrade from Yagrush (80) via the Club Trials: 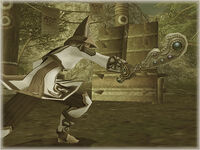 Also known by its alias, "Chaser," this robust red sandalwood club is plated in phosphorescent gold and exquisitely encrusted with an array of magically imbued sacred stones.

It is said to have been the weapon of choice for the legendary admiral, Veydal, who commissioned its creation to master crafter priests specifically for high sea encounters with the dreaded Leviathan.

Retrieved from "https://ffxiclopedia.fandom.com/wiki/Yagrush_(85)?oldid=1694395"
Community content is available under CC-BY-SA unless otherwise noted.