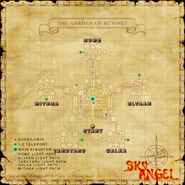 1st Floor with route suggestions to the race specific Key Items, Title and the elevator. The teleporters need to be used to "zone" to the other floors. 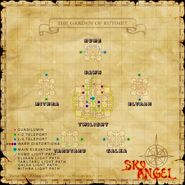 2nd Floor with route suggestions to the race specific Key Items, Title and the Brands. 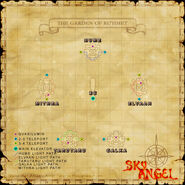 3rd Floor with route suggestions to the race specific Key Items and Title.
Add a photo to this gallery 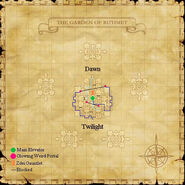 Map with only the routes to the Brands. Where the first lines end, at the pink spots, are warp fields which are walked into, there is no need to use anything to "zone" and thus any aggression possibly attained on the way will be gone. 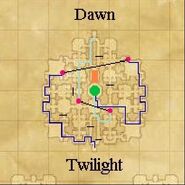 Closeup of the routes to the Brands. 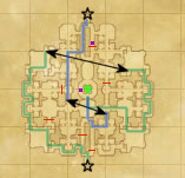 Closeup of an alternative map of the routes to the Brands.
Add a photo to this gallery

Mission Orders
The Gate of the Gods--the portal leading to the highest level of the palace--has opened. While your companions scramble to reach the audience chamber, you must find which of the five towers will return you into the light...

SPOILER WARNING: Click here for additional details about this story line.
Retrieved from "https://ffxiclopedia.fandom.com/wiki/When_Angels_Fall?oldid=1698227"
Community content is available under CC-BY-SA unless otherwise noted.