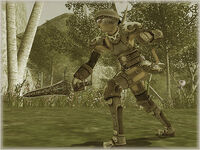 Forged from meteoric iron during the foregone age of the Olduum civilization, this unworldly dagger is fabled to have been wielded by the wargod Indra himself. Thought to have been forever lost within the dark passage of time, it was eventually excavated from within an ancient shrine surviving deep inside the bowels of the Aydeewa Subterrane. The recent discovery of a minute powering device embedded in the hilt has sparked heated intellectual fervor among the Empire's alchemist community.

Vajra is a Sanskrit word meaning both Lightning and diamond (or specifically adamantine; i.e. "diamond-like") and is a ritual tool or spiritual implement which is symbolically important to both Buddhism and Hinduism, but is particularly important in Buddhism. Another pronunciation of the word is Vijri

In Hindu mythology, Vajra is the weapon of Indra, the Vedic god of rain and king of Devas. It is a powerful weapon having the combined features of sword, mace, and spear. It was created out of the hard thigh bones of sage Dadhichi who gave up his life willingly so that his spine could be used to build the weapon for use in a noble cause. When Vritra, the serpent or dragon of drought had swallowed the cosmic waters, Indra split the serpent's stomach with Vajra, releasing the waters. Due to this supreme sacrifice, sage Dadhichi became a legend.