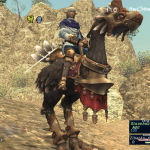 Long ago, my family lived happily in the city of San d'Oria. Despite the Crystal War raging and their standing in the ranks of our nation's army, my parents were able to come home nightly for a fresh meal prepared by the servants. As the first and only son of House Leroy, I spent my days training to join the armed forces as well. As I've mentioned before, I was hailed as nearly a prodigy in, though it did take time for my teacher, Rainemard, to come across me, sensing the reserves of untapped magic potential.

While still small, I was taught to use a dagger. Though somewhat lacking in the nimble grace and agility found in other races, I would still consider myself rather decent with a knife, even to this day. Learning the sword, now that was a challenge. My sword tutelage began in San d'Oria, though by the time I'd started up on this, my parents had passed on. Even with the help of my teacher, I found fencing difficult.

For a time I decided to forgo my sword training, as I focused more on Black Magic, living in Windurst as I did so. Every day, I studied new spells along-side an Elemental prodigy, a little one who's insatiable appetite was always beyond my understanding. With some help from the Mithra, I was able to improve my skill with the knife a bit more. My Black Magic, however, showed little sign of improvement. By the end of my stay, I had managed to perfect casting Tier IV elemental magics, but this was a base function for any Black Mage of the time, and my inability to hit multiple targets with attack spells only had the little ones shaking their heads. My White Magic skill showed similar results in taking new spells in, but the potency was so remarkable, it made up for what I was lacking in Tier complexity.

When my time of training ended in Windurst, I was sent to Bastok to reunite with my teacher. Rainemard held no true loyalty to any nation, thus traveling between the three as a freelance. It was here that I met a Summoner of extraordinary caliber. A Tarutaru to no surprise, this little one had managed to conquer each of the Avatars on his own, despite being just a few years older than I! Though I learned nothing more than spirit pacts and elemental summoning, the understanding of the art did help me to understand my own magic a bit more. It is also here that I returned to the sword. My teacher trained me daily to use the rapier, and only after I had mastered the style of fighting did he allow sparring with the Humes. I thank Altana for that now. The manor in which Humes swing their weapons holds little regard for their own safety or for the stability of their weapons. I'm honestly surprised more of them didn't break their weapons during training sessions as they swung blades to and fro so recklessly. With the strong foundation my teacher had given me, I've resisted outside influence in sword styles for the most part, opting only for the rapier training I received from my master, and the longsword training I underwent after returning home.

Retrieved from "https://ffxiclopedia.fandom.com/wiki/User:Ziharku?oldid=1429263"
Community content is available under CC-BY-SA unless otherwise noted.