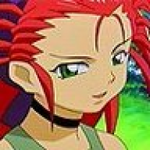 The nickname WashuOtaku means Washu Geek or Fanatic. This player has had a long fascination with Washu Hakubi, from the Tenchi Muyo! Ryo-Ohki anime series; developing a popular Washu shrine and obsessing about the red-headed goddess. It hurt his heart though that he could not name his first character Washu since it was taken when he started playing Final Fantasy XI.

WashuOtaku had two characters, Tenchi and Haruko, that were both on the same Quetzalcoatl server. He has real life friends that also play FFXI, but will not (for some reason) join his server.

WashuOtaku joined FFXIclopedia because he wanted to help add new information, just like everyone else that joined. Also, he felt that because he had an account also on Wikipedia, he could infuse some of the tools they use into FFXIclopedia. This was mistake though since it pissed the FFXIclopedia Admins. However, he eventually got into their good graces and continues to this day to make minor updates in on various pages throughout the FFXIclopedia universe.

Retirement from FFXI:
As of October 31, 2010, WashuOtaku retired from the world of Vana'diel (a total of six years and seven months). The decision to leave was not easy, but felt that the timing was right since several friends departed for FFXIV (and regretted it). He will always think fondly of his time in Vana'diel and miss the friends and adventure that made FFXI so enjoyable.

Quote:
There can be no second chance when kung-fu is used for evil!

History of the Character's Name:
Full name is Tenchi Masaki, the main character in the anime series: Tenchi Muyo! Ryo-Ohki. It's a story of a boy and the alien women that love him. The series has spawn several spin-offs and is still fairly popular to this day since its debut in 1992.

Character's Role:
Tenchi is my main character. All missions, quests, jobs, and everything else in between is on this character. When chatting with others in Friend's List or Linkshell, "Tenchi" is the name they refer me as. On October 31, 2010, Tenchi went into retirement and settled down in the Tavnazian Archipelago area.

Crafts:
I'm not an overly big crafter, just every once in a while I get into it. Mostly I see it as a time killer, because it takes such a long time to gather all the ingredients. My strongest craft is Cooking, followed by Alchemy; both of which have low profit margins or none at all.

Here are my crafting key items and crafting bonus items:

Here is a nice progress chart of all my jobs. Yep, I'm no where near getting Maat's Cap.

This could also be considered the trophy room; because it doesn't matter how much gil you have, but what kind of gear you have. Granted, more gil helps too.

Not a big Assault player, but eventually made it to Second Lieutenant with the "Salaheem's Sentinels."

History of the Character's Name:
Full name is Haruko Haruhara; she is the main female character from the anime series FLCL. In the series, she is a pink-haired space alien from outer-space who rides a Vespa and wields a blue, left handed Rickenbacker bass guitar model 4001 (similar to the one used by Paul McCartney).

Character's Role:
Though she has some level, she is considered a mule to my main character. Used mostly to sell stuff on the Auction House and store items. On October 31, 2010, Haruko went into retirement in San d'Oria.

Here is Haruko's progress... which isn't much.

Retrieved from "https://ffxiclopedia.fandom.com/wiki/User:Washuotaku?oldid=1679904"
Community content is available under CC-BY-SA unless otherwise noted.