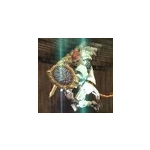 Character Name: Samoj
Main Jobs: Blue Mage, Paladin, Dragoon
Server: Asura
Linkshells: FunkJunkees, GenesisCovenant, Seascape
Bio: Started playing due a friend's urging. Before I obtained my subjob, two real-life friends and I started a linkshell called FunkJunkies. Today, 'Tha Funk' has expanded to include a large group of such friends, as well as online ones. After reaching 75 with Paladin shortly after the Aht Uhrgan expansion, I decided to level Blue Mage as my second job to 75, which quickly became my main job. In late '07 our small-but-dedicated LS joined Amicitia to work on endgame. After some time we switched servers, brought back the Funk, and started doing low-man endgame. Realizing that low-man endgame strength lies in a solid community, we returned to Asura. Joining forces with reliable players that we'd adventured with before, we created ForGreatJustice, an event shell focused on limbus/sky/sea/ZNM. From there, FGJ was split between a revived Amicitia (which later became GenesisCovenant) and Seascape. The following page is a documentation of setups that I use for my two jobs, to some degree of success.

Retrieved from "https://ffxiclopedia.fandom.com/wiki/User:SamojDaCat?oldid=1557901"
Community content is available under CC-BY-SA unless otherwise noted.