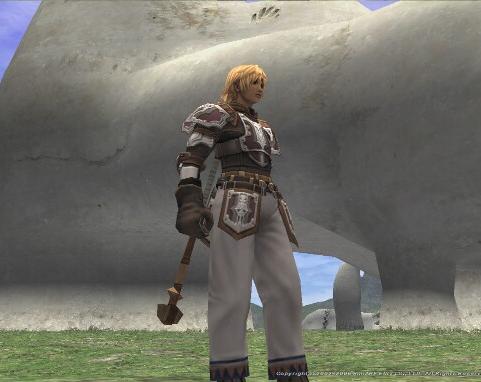 If you are scared of geeks turn away now


After a crippling right shoulder injury Drow found it hard to wield his one-handed hammer. Now using the supporting strength of his left arm he tends to use poles, although he stays fully trained in both and has been known to dual wield hammers if the occasion calls for it.

Windurst is Drow's home Nation but has always felt more at home around his own kind - in Bastok.

Well I always help new players, show them how to make money and often give them a little starting cash. Friends that I've invited onto Odin I've always helped out and stayed loyal to by making sure they can participate in missions and some quests. If they can't go, I can't go.

Most important to me mission wise is the CoP, with Frag and Shrew.

My name? Some of you may know a Drow is a Dark Elf, so why a humé? Well I originally did pick an Elvaan, but after 30 minutes of running around and having to turn the camera past my massive limbs I got a little annoyed. Thus Drow the Humé was born.


Now I make an effort each day I'm in Vana'diel to personally insult the Elvaan...

Bit of a strange one. My first training and farming ground was in the Outer Horutoto Ruins. For many months I collected onions from the goblins while getting experience points - It was my own little den that was rare to have anyone else in it.

After a while I got a little more adventurous and went deeper into the Ruins, fighting stronger foes such as ghouls and Jellys. Although I don't go there too often anymore but whenever someone needs help there or I want to see how far my strength has come I'll take a trip to my old second home Outer Horutoto Ruins.

More variation in monsters. Different randomly selected textures for monsters that are spawned.
Multi-headed monsters.
Carebear despawn system removed, monsters are no longer scarey.
More solo content for _all_ levels not just 75s.
A better PvP system. Like dueling that can be accepted at any level.
New beastmen not just to be a frog with a stick.
When a SMN uses a Spirit (Elemental) it be worth using. Or Spirit II spells.
There be a TP attack for throwing, even if it's just RNG only.
WHM to have a Cross Bow shaped like a cross (crucifix) :D
RDM and BLU to be perfectly even while being so different (impossible I know D: )
When a player uses (eats) a food, it actually looks like the player is eating, not exploding into flames.
Eating in combat stops you attacking and has a long duration.
Cloths to increase chocobo riding speed as well as duration.

Retrieved from "https://ffxiclopedia.fandom.com/wiki/User:FFXI-Drow?oldid=513530"
Community content is available under CC-BY-SA unless otherwise noted.