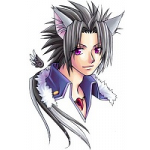 A dedicated Final Fantasy player since FF7, Darkstarr has played most of the series, and is looking forward to FF13. He has (as of today) successfully completed FF1 (easy mode), FF7, FF8 (and fell in love with Rinoa the first time he played), FF9, FF10 (and loves the cutscene where Yuna performs the Sending ritual while dancing on the water), and FF Tactics, as well as unlocking all of the alternate endings in Chrono Trigger (from Final Fantasy Chronicles). He is currently working on completing FF6, FFX-2, and FF12 (on the rare occasions when he has time), and plans to eventually cosplay a male Mithra at science fiction and gaming conventions.

Darkstarr has been known to randomly correct spelling and grammar errors in various FFXIcyclopedia pages, for no other reason than that "typos drive me nuts".

Currently divorced, Darkstarr hopes to one day find the right lady--namely one who enjoys RPGs (both online and otherwise)--to partner with both in game and in real life.

Darkstarr prefers character jobs such as Red Mage because of their ability to use swords and spells, a holdover from a youth that he claims was "misspent playing Elf Warrior/Mages in D&D". He also admits to having a Mithra fetish, but is quick to add that "my therapist is working with me on that."

Darkstarr's future FF11 goals include having at least one character finally achieve level 75, completing all of the Zilart, Promathia, Aht Urgan, and Crystal War missions, and having each of his active characters achieve Rank 10 in their home nations and Reputation 9 all over Vana'diel. (He also has specific goals for each character; those goals are listed on the characters' respective subpages.) His other goal is to find enough free time to play at least one day per week, and has been known to play for up to eight hours at a stretch. (His secret, he says, is being on disability, so that he doesn't have a "real life" to get in the way of his Final Fantasy addiction. Rumors of his being ordered to attend RPG Players Anonymous are completely unfounded.)

When not playing FF11, Darkstarr has been known to make appearances at Pacific Northwest-area SF conventions, and hopes to one day meet Jen "Savage Sparrow" Brazas, creator of Mystic Revolution, and Fred "Piro" Gallagher, creator of MegaTokyo.

This user enjoys a FFXIcyclopedia Reputation of -2

Retrieved from "https://ffxiclopedia.fandom.com/wiki/User:Darkstarr?oldid=1221286"
Community content is available under CC-BY-SA unless otherwise noted.