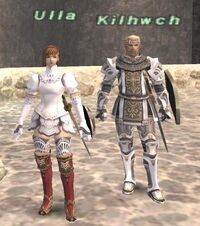 Ulla is a mysterious young girl. They say she bore witness to a divine revelation, and now wanders Vana'diel as a pilgrim-wilgrim knight. She's recently left her homelands of Bastok and ventured nearer the realms of San d'Oria. Her devoted attendantaru Kilhwch is ever by her side, and carries with him the renowned sword Excalibur. The thing is, he's a celebrated knight in his own right, giving many rise to wonder what could have caused him to pledge his fealty to another. Like any young lady, Ulla has a soft spot for beautiful flower-wowers. If you seek to court a fair maiden, perhaps a bouquet mightaru be best.

"I refuse to stay hidden in my manse like a lark in a cage while innocent blood is spilled on the streets."
"My brothers and sisters! Raise your blades for justice!"

"Might you be a legionaire of the Bastokan Republic? It seems your nation faces an uphill battle in its quest to bring peace to the land. Perhaps Kilhwch and I may be of some assistance."

Retrieved from "https://ffxiclopedia.fandom.com/wiki/Ulla?oldid=1677093"
Community content is available under CC-BY-SA unless otherwise noted.