View source
watch 02:34
Fire Emblem Warriors: Three Hopes - The Loop
Do you like this video?
Play Sound
For the Trust Magic version of this NPC, see Trust: Trion. 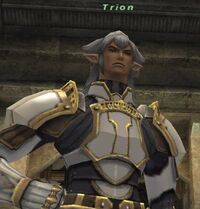 Trion is the eldest son of King Destin. He and his brother Pieuje are fierce rivals, and will disagree on almost anything. His sister is Claidie.

Trion fights alongside the party in the battle for San d'Oria Mission 9-2. He fights in the second half of the battle, against Warlord Rojgnoj, Rojgnoj's Left Hand, and Rojgnoj's Right Hand. Trion must be kept alive for this battle. If he dies, the battle is considered lost.

Trion is a Paladin in all aspects of his fighting style. He casts White Magic, fights with a sword and shield but has amazingly low defense with a gigantic HP supply, something that resembles more of a Monk.

He goes by the name Raillefal during the Aht Urhgan missions.