Titlacauan also known as Tezcatlipoca (Classical Nahuatl: Tezcatlipōca pronounced [teskatɬiˈpoːka]) was a central deity in Aztec religion, one of the four sons of Ometeotl, he is associated with a wide range of concepts including the night sky, the night winds, hurricanes, the north, the earth, obsidian, enmity, discord, rulership, divination, temptation, jaguars, sorcery, beauty, war and strife. His name in the Nahuatl language is often translated as "Smoking Mirror" and alludes to his connection to obsidian, the material from which mirrors were made in Mesoamerica and which was used for shamanic rituals.

He had many epithets which alluded to different aspects of his deity: Titlacauan ("We are his Slaves"), Ipalnemoani ("He by whom we live"), Necoc Yaotl ("Enemy of Both Sides"), Tloque Nahuaque ("Lord of the Near and the Nigh") and Yohualli Èecatl ("Night, Wind"), Ome acatl[3] ("Two Reed"), Ilhuicahua Tlalticpaque ("Possessor of the Sky and Earth").

When depicted he was usually drawn with a black and a yellow stripe painted across his face. He is often shown with his right foot replaced with an obsidian mirror or a snake—an allusion to the creation myth in which he loses his foot battling with the Earth Monster. Sometimes the mirror was shown on his chest, and sometimes smoke would emanate from the mirror. Tezcatlipoca's nagual, his animal counterpart, was the jaguar and his jaguar aspect was the deity Tepeyollotl ("Mountainheart"). In the Aztec ritual calendar the Tonalpohualli Tezcatlipoca ruled the trecena 1 Ocelotl ("1 Jaguar")—he was also patron of the days with the name Acatl ("reed"). 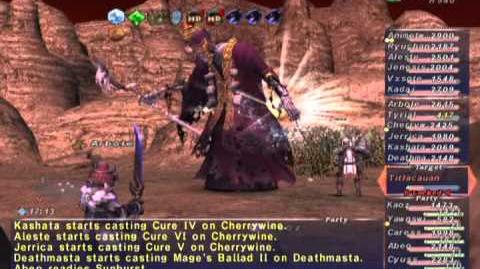