Taken from Vana'diel Tribune I Issue No. 21

Maat, a most mysterious figure, can be found quietly training on the grounds of the Auroral Place, the seat of the Jeunoan government. Maat is in fact a legendary fighter, held in great esteem by even the Ducal Guard.

But the adventurers who come to him for training feel somewhat differently; few hide their opinions when questioned about his training methods.

Some respond to the mere mention of his name by curtly saying that he is an old crank who demands the impossible. Others will go even further, saying things like:

"One day I'm going to wring that old geezer's neck myself."

The one most keenly aware of this aggression is Maat himself. That is why he has decided to offer this most daunting of challenges to those that he deems strong enough.

"Well, now that you mention it, I think I'd be delighted to test your might with my own hands," he has been heard saying.

This is, at long last, a dream come true for many. News of the challenge spread quickly, and Maat is now swamped with challengers.

And what of those who have finished this final showdown? What are their impressions? 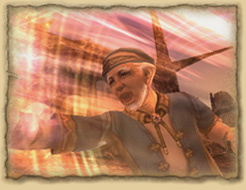 Vana'diel Tribune reporter Finleen was there to ask them.

"I let him know exactly how I've felt all these years!" said a warrior named Dainslef (Asura).

"I'm not letting him concede next time! I'm taking him down!" promised Waka (Ramuh), a white mage.

"With this, I can once again grow as a red mage," said Erene (Bismarck).

"All you've got to do is get him before he gets you," said Gsan (Ramuh), a thief.

"It's all about knowing when to use your abilities," said Ellenoyle (Asura), a paladin.

"Honestly, sometimes he just made me mad. But he also showed me my weaknesses," said a dark knight named Yukine (Ramuh).

"I'm so happy I got to jam with Maat, " said a bard named Legoras (Ramuh).

"Don't tell anyone, but I was so nervous that I grabbed the wrong equipment for the fight," lamented a ranger named Mnick (Fenrir).

"Honest to Goddess, I only won by a hair," said a ranger named Sio (Ramuh).

Surprisingly, many of those interviewed have suffered painful defeat at Maat's hands. It was that very experience that allowed them to beat him in the end. Perhaps this is the best indication of Maat's true strength. But maybe we'll never know for sure. He's certainly not just some "irritating old codger."

Tales of Maat's dealings with adventurers have reached as far as Bastok. Degenhard, who trains on a corner in the market district, said excitedly:

"That Maat fellow? Is he still around? I've got to say that I'm impressed with all of these people who are taking him on and winning. Folks like that make for a hard act to follow."

Many decades ago, Degenhard trained at the same dojo as Maat. He's one of the few who knows Maat's mysterious past.

They were fierce rivals in their youth. They shared the same dreams, the same joys, the same pain. Maat has been an important force in Degenhard's life.

The two aged warriors faced off many a time.

Even living so far apart, they still follow the same training regimen they always have, and they still impart the same dream to young adventurers.

Retrieved from "https://ffxiclopedia.fandom.com/wiki/The_Ultimate_Challenge?oldid=143152"
Community content is available under CC-BY-SA unless otherwise noted.