Note: There is no a longer level restriction on any Promyvion area. Some information here still refers to what the mission is like to do at level 30. The entire mission, including all memory receptacles and NMs, can be easily soloed by any job at level 75 and even considerably lower. No Anima are needed. However, be aware that there are new, high-level enemies ranging from about level 78 to 80+ in these areas, but they can be avoided easily. Trusts can be called through the entire climb and Spire fight, making it possible to solo this at 40 or even earlier. 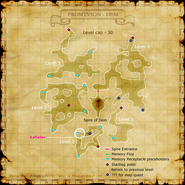 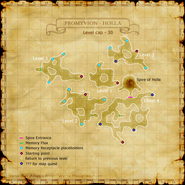 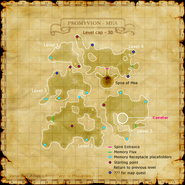 All monsters are Too Weak to a level 75 character, except for Idle Wanderers, Livid Seethers, and Woeful Weepers, which can be easily avoided on the way to the battlefields.

Mea's boss is the Delver (Craver type). Its TP attacks are:

Dem's boss is the Progenerator (Gorger type). Its TP attacks are:

Holla's boss is the Wreaker (Thinker type). Its TP attacks are:

After obtaining your third light, you appear in Lufaise Meadows after a cutscene.

Mission Orders
The first mothercrystal has been tainted with Emptiness. Hurry to the remaining crags to find out if any other stones have met the same fate.