The Distant Continents of Vana'diel

This article is an attempt to tie together all the loose stub pages on continental information. Please expand on this page with any relevant information you may have.

The largest continent of Vana'diel. Climates vary from the frigid cold of the northern glaciers to the sweltering heat of the southern deserts. This land has an abundance of plant and animal life, and a large variety of mammals make Quon their home. The Quon continent is populated by the Hume, Elvaan, and Galka races at a ratio of 6:3:1. The main nations are the Elvaan Kingdom of San d'Oria, situated in the central northern forest belt; the southern Hume Republic of Bastok, surrounded by mountains and desert; and the Hume-governed Duchy of Jeuno, built upon the bridges that connect Quon to the continent of Mindartia.

The staple food of San d'Oria is wheat, while Bastok relies on harvesting rye and popotoes. Many regions also herd giant sheep as livestock.

The advance troops of the Orcish Empire to the north and the stronghold of the Quadav in the swamplands to the east comprise the two main beastmen powers on the continent.

This continent is situated to the east of Quon. With the exceptions of Sarutabaruta in the south and Li'Telor to the northeast, Mindartia is comprised mainly of dry, rocky badlands. The vegetation here has adapted to suit the arid conditions, and animal life is dominated by reptile and insect species. The main races of people are the Tarutaru and the Mithra at a ratio of roughly 4:1. The Federation of Windurst is the homeland of the Tarutaru, and features the magical city of Windurst and the port town of Mhaura as its centers of civilization.

Corn and popotoes are the staple food source of Windurst, with dhalmels and rarabs kept as livestock. The beastmen presence takes the form of the Yagudo Theomilitary, a race that makes its home to the west of the continent and maintains a pretense of friendly relations with Windurst.

Dominated by The Empire of Aht Urhgan, the Western Aradjiah Continent is a landmass found east of Mindartia, across the Gugru Blue and is referred to by people throughout Vana'diel as "The Near East". The region of Aht Urhgan is part of Aradjiah, although only a portion of the continent can be explored by adventurers as the land mass actually extends far beyond the precipitous mountain ranges that lie in the center of the Aradjiah continent. The mountains are inhabited by the Trolls, a warlike race of giants once themselves mercenaries for the Empire, but who now ally with the Moblin folk. The lands beyond are occupied by races or tribes which have been at war with the Empire in the distant past, and about which the Imperial Palace in Aht Urhgan Whitegate seems very reluctant to divulge any details.

The accessible areas of land on this continent range from lush forests and roiling volcanoes to haunted reefs and undersea citadels. The Empire of Aht Urhgan, unlike The Marquisate of Tavnazia, is not an intricate part of the history of the Great War, mainly due to the Empire's refusal to come to the alliance's aid in those troubled times.

Related to the continent through conquest by The Empire of Aht Urhgan, the Arrapago Islands lie north of the western peninsula of Aradjiah. There is but one vestige of civilization left intact on the island, that of the port city of Nashmau. The rest of the lands are covered, generally in a haze. The greenness of the foliage should not distract visitors from the fact that Lamiae, Imps, Qutrubs, and undead creatures such as skeletons, fomor and more lurk in these areas, waiting to prey on the unsuspecting adventurer.

Distant Lands of the North

Rhazowa is the frozen continent lying due north of Quon. It is home to the Orcish Empire and likely the island(s) from which the Gigas tribes originate from.

Distant Lands of the South

Olzhirya is the continent located far, far south across the seas from Mindartia, and is home to the great nation Gha Naboh Matriarchate.

The Gha Naboh Matriarchate, or often better know simply as, Gha Naboh, is the great nation that occupies the entire continent of Olzhirya and its surrounding islands which likely include Tsahya and possibly Zhwa

Zhwa is a remote island nation located around the Olzhirya continent.

Tsahya, an island nation, is one of the remaining areas in Final Fantasy XI yet to be revealed. What is known so far (which is very little) is that it is located somewhere to the south of the continents of Quon and Mindartia. It was for some time speculated to be the homeland of the cat-like race Mithra, however the Wings of the Goddess expansion pack confirmed their homeland to be the continent of Olzhirya, also located to the south.

This is only briefly mentioned in Garhada Teak Lumber.

Distant Lands of the West

Ulbuka is the continent to the west of Quon. The nearby Adoulin Islands fall within its boundaries.

It was home to the exorcists Gertrude, Brian and Roger before the return of The Dark Lillies brought them to the Middle Land continents, as well as Vhino Delkahngo before she arrived in Windurst to fight in the Crystal War.

It is also likely that the legendary homeland of the Elvaan, Aldiaine, is in Ulbuka.

The continent bears origin to the Bison Jacket Set and the Totem Pole items.

A World View of Vana'diel 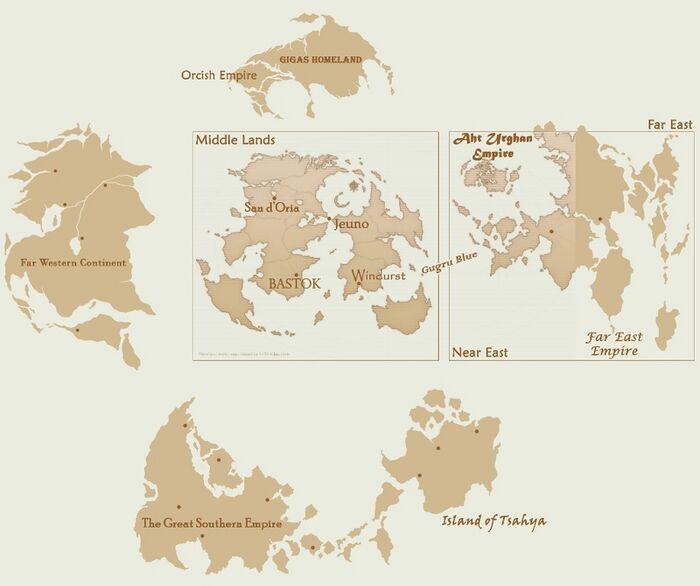