I apologize if it makes sense, but I could not make sense of the first "paragraph" of the Dual Wield section, which says:

If they do not, calculating the TP using the Reduced Delay/2 will give you an incorrect result.

That is cryptic. The best I can assume is that it's clarifying in case your weapons have widely differing delays, and that each weapon's TP gain matches (Half of Modified Delay) rather than (Individually Modified Weapon Delay).
Of course, it could just be an artifact from a prior edit. --Taeria Saethori 04:34, 6 March 2009 (UTC)

are you sure that the healing link is the correct link? did you mean to point at a page for resting??

(Question answered by page update -- thank you!) Question. Fighting Clots in Bibiki Bay - Purgonorgo Isle, I was told by my LS leader not to engage, that hitting a jelly is pointless and only gives them TP for Fluid Toss... so I started purely nuking. I wasn't even casting DoT spells... so pure nukes, and they still do Fluid Toss. If TP is only gained from melee attacks, where is their TP coming from?

This page has been made inaccurate by the recent TP floor changes, I'd update it myself but I don't know where accurate new info is. --Syeria 19:11, 19 April 2006 (PDT)

Lots of stuff gives mobs TP, but I'm not sure about the new changes. Before, the mob could most certainly gain TP from magical attacks and enfeebles. --Chrisjander 21:31, 19 April 2006 (PDT)

I've uploaded a chart for TP gain per hit plotted by weapon delay I don't know how to embed it into the page though, so if someone with more wiki experience than me could include it... Aurikasura 13:07, 9 May 2006 (PDT) 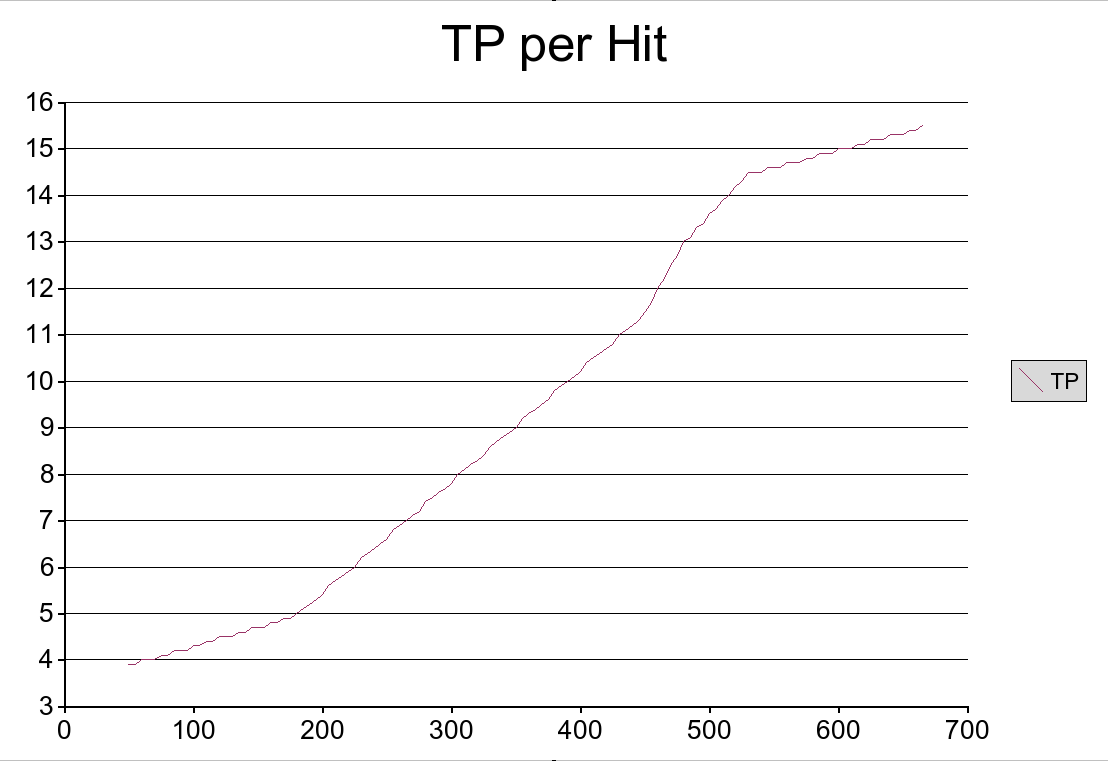 "When hit by a melee attack, enemies gain the attacker's BaseTP + 3." I've seen this a lot, actually, I think people claim that the TP patch changed it to TP +1, and question it's accuracy. I do a lot of soloing as RDM/BLM, and fight things with Stoneskin up at pretty much all times. I find that I get to 100 TP before the mob I'm fighting does, unless I have trouble getting SS back up. Usually I get to 100 TP, hit a WS, and then get to around 15-20 TP before the mob I'm fighting uses a WS. Naturally, when I toss out a nuke, or a drain, this is different, but I don't think that this TP difference is covered by just haste. I haven't worked the numbers out on haste, but it shouldn't be that dramatic.

Thanks for the graph, Aurikasura. Could you plot the old TP gain in the same graph as well, for the sake of comparison?

Anyways, it's still Mob TP +3. It's practically impossible to get TP faster than a mob - you'd have to have a combination of both Store TP and Subtle Blow, using a high-delay weapon, while taking 0 damage in the process. The reason it seems you get TP faster is because mobs don't use their TP moves immediately until their HP is at 20% or less. Above 20% HP, there's a random chance it'll use its TP move (assuming it has 100+) after each time it attacks.

The easiest way to check is through subbing BST and using the <pettp> command.

Here's what I came up with based on the formulas:

I added links in the article to both graphs.

Regarding monster TP gain, like Aurikasura said, the mobs are saving their TP. Once the mob reaches 100 TP, there is a random chance it'll use its TP move after each of its attack rounds, but the probabilities are very low, and it often takes a while for the mob to use its TP. It doesn't change the fact that it reaches 100 TP sooner than you, though. By the way, most physical TP moves are short-ranged - if you can anticipate that the mob will use it, you can unlock and run backwards right before the mob performs its TP move and you'll be too far away. I often do this when I'm certain the mob is holding TP, and my next hit will take it do <20% HP. I also like to Flash, use a WS to lower its HP to <20%, and force its TP move to miss.

That was my revision. With an amount of StoreTP equal to 30 and a weapon with a delay of 450, according to the formulas the TP return should be 14.95, but in reality the TP return with a 450 delay weapon is between 15 and 15.052 (this is known because someone with 450 delay and 30 storeTP will gain 15 TP per hit all the way up to 300). So either the formulas are correct and +30 storeTP is actually equal to 30.4% more TP per hit instead of 30%, or the TP formulas are rounded improperly. The latter answer is simpler and more logical, and is therefore most likely to be true.

And for the record, even prior to the change the game used at least two decimal places for TP, and the game never actually rounds, it truncates. --Klades

I did a lot of testing of Store TP and Dual Wield before the update, and it was all consistent with truncating TP to one decimal place. How have you seen it using more than that?

Whoops. To my embarassment, it seems I neglected to remember that the Brutal earring has +1 StoreTP on it. Just enough to cause 15% return with a base TP gain of 11.5.

And through personal observation, I discovered that my 4th hit resulted in a displayed TP total of 60%. I had really been quite sure that it used two decimal places prior to the update though... how strange. --Klades 19:26, 20 June 2006 (PDT)

I'm Going to feel like a teacher on this point, but...

I'm going to feel like a teacher on this point, but all 3 TP graphs should have their axes labelled. It's an honest mistake (and one which probably drained my red pen more than any other error when I worked as a TA), but it needs to be done for clarity. Readers should not have to think or try to discern what the numbers along each axis represent. The only thinking should be done when looking at the line and trying to interpret it. --zoogelio-forgot-his-password 19:54, 20 June 2006 (PDT)

Hope the pictures of the 3 tables are ok now, the solution with just thumbnails on right failed always, especially when there are 2 columns and the thumbs crossing new sections; i think its just a bug. The thumb pictures always overwrite the text of a new column section - no text floating. Although i tried evrything for floating text: Tabled the entire text and table in table. The only way is either made the thumbs smaller , around 60 px and they fit the page at the right, force the section with pictures to end when the last thumbnail end (= a huge white gap) or position them as i did it, so they cant cross another article section.--Golandra 07:49, 31 August 2006 (EDT)

Gallery command huh? im on with IE now, hope this works on opera, too. Thats why i ve choosen a table, but im fine with it atm. But i need some more opinions on this: Image talk:Tp-10sec.png before i delete or recreate it. I'm quite unsure.--Golandra 12:43, 31 August 2006 (EDT)

Does it mean to say that Blood Pacts give no TP *to the enemy* ? Because blood pacts most certainly do give TP to the avatar. Tahngarthortalk-contribs 21:56, 3 January 2009 (UTC)

Where it mentions the Warrior ability "Retaliation" it originally stated that it did NOT produce TP for the War which is just not true. I simply removed the "not" since you will receive TP for a successful retaliation as if you had hit the monster with a normal hit. HeavensSword 15:21, 6 August 2009 (UTC)

So for example, if you were using a weapon with a delay of 450, the tp per hit is 11.5. Say you also had Subtle Blow +20 the following would be the calculation.

If you were casting a spell with the same Subtle Blow rating as the above example the calculation would be as follows:

Retrieved from "https://ffxiclopedia.fandom.com/wiki/Talk:Tactical_Points?oldid=1230908"
Community content is available under CC-BY-SA unless otherwise noted.