Easily duo'd with NIN/DNC and RDM/BLM, NIN kept up shadows and healed himself as I nuked and debuffed. Also solo'd it as RDM/BLM with Chainspell to make fight go by faster. Got Ice resist+4 on Penitent's Rope and Earth Resist+14 on Aquilo's Staff. Silveria Lakshmi

Easy fight with no danger, Haubergeon +1 augmented with resist petrify +2 (atleast it wasn't nerfed, all i can say for now.) GL. —The preceding unsigned comment was added by Volfield (talk • contribs).

Recieved +3 Resist Paralyze to a Hachiman Domaru. It did use Head Butt and had an Add effect of Petrification. Zigerus 21:19, 21 July 2009 (UTC)

Did fight twice duo as RDM/NIN and won pretty easily, first time it had Additional Effect: Drain and second time it was Additional Effect: TP Drain, got dex-1 vit+2 agi-1 on errant houppeland (lol) and MAB+1 and Enmity-1 on Narishmas Vest or whatever it is :P 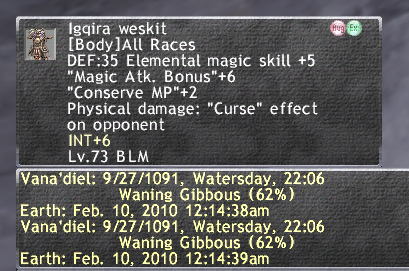 Retrieved from "https://ffxiclopedia.fandom.com/wiki/Talk:Skahnowa?oldid=1381119"
Community content is available under CC-BY-SA unless otherwise noted.