When kiting this through tunnels, this move does NOT put up the wind shield. I've killed several of these and it has NEVER used wind shield like this. Not really sure why or how kiting it is different for this, but perhaps fighting it side on to a wall is enough to prevent this.

The first comment here was added by myself way back when Amphipteres were first introduced, and has no relevance to the blue magic version of the spell. But how awesome would a wind shield be lol --Blazza 03:55, December 9, 2010 (UTC)

Got it with a few friends(BLU/NIN x4). Decided to kite this with everyone setting Regurgitation, Sheep song, Yawn, and Magnetite Cloud. Kited it up and down the ramp at I-9 of Beaucedine Glacier(S). I learned it from the second Amphiptere we killed. It was a blast. Jack Van Elraton 07:20, December 9, 2010 (UTC)

The Amphipteres in Beaucedine Glacier (S) can be solo'd by BLU85/NIN42 straight tanking. I recommend bringing friends because it's hard to swap in your learning gear while trying to survive. This was also the hardest spell for me to learn from this update even with all relevant +Blue Magic skill merits/gear and AF hands, so I recommend getting a few more levels of Blue Magic skill before trying to learning it. --Eremes 01:58, December 10, 2010 (UTC)

Feel free to share any experiences with learning this spell here! This spell in particular was one of those spells for me for many reasons.

The two big things to tackle here are the respawn times of the Amphiptere, and the difficulty in getting them to aggro. 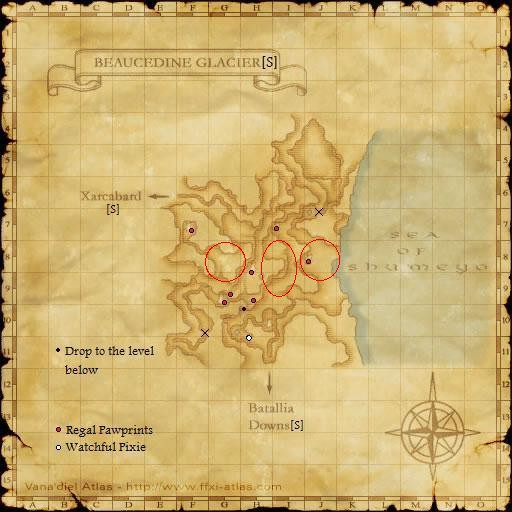 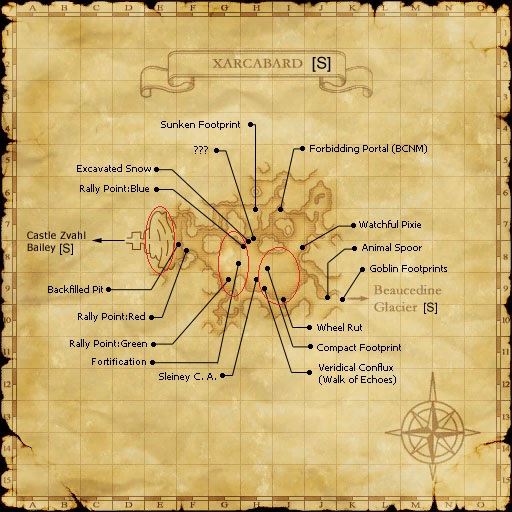 The matter of getting these things to aggro is the most frustrating element involved. Amphiptere aggro by true sight, so the good part is you can avoid aggro by just about everything save imps and tauri, however their aggro mechanic seems bugged most of the time. When it's possible to aggro Amphiptere, you'll want to be in front of it and allow it to move over to you. This can be challenging due to the sheer movement speed of them and any true sight enemies in the landing zone.

If successful, your new friend should come down and fight you without much hassle. That said, let's get to the hassle. I'm not sure if this will be true for all players, however on my server at this time, only one of these mobs will reliably come down to fight, located at (G-8) of Beaucedine Glacier (S) near a field by 'Nue Tower'. Every other one in both zones does not seem to aggro in the same way.

My current theory is that these are either bugged out on this server and will be fixed on maintenance, or their aggro area has been reduced to save players some hassle when participating in Campaign and Walk of Echoes. The latter theory is supported by the fact that the lone one at (G-8) of the glacier is nowhere near a C.A., Veridical Conflux, or fortification. I've only gotten the Greater Amphiptere in Xarcabard (S) near the fortification to land once by a wall on the very edge of the map. I believe this was because it was outside a prescribed range the mob could not aggro in the center due to the nearby fortification and campaign battle. The only exception to this theory however is the Greater Amphiptere near the castle, which is not by a campaign battle or Veridical Conflux, however will not aggro for any reason (possibly line of sight due to the challenging terrain of the area.)

Once one actually lands, simply fight under its wing, not too far back to avoid Tail Lash and if possible, stay against a wall to avoid knock back into additional enemies.

I hope this helps! I'm currently 0/6 on this spell (it's my last non-Unbridled Learning spell, too :<)... but I wish all you fellow Blue Mages luck out there.

I spend a ton of minutes trying to aggro the thing in Beaucedine Glacier (S), but it didn't work, so I followed the trick regarding trying it near G-8, where it worked in an instant!

Retrieved from "https://ffxiclopedia.fandom.com/wiki/Talk:Reaving_Wind?oldid=1524679"
Community content is available under CC-BY-SA unless otherwise noted.