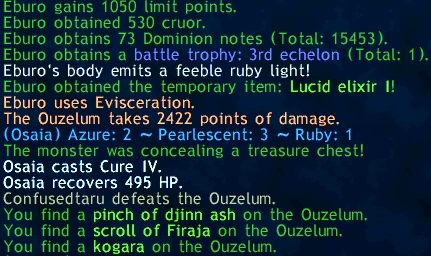 I second this, easy solo as dnc/nin. Took a different route though; used RR, GN, and Kirin atmas and went in full haste gear. His accuracy was horrible and fight took around 10 minutes. Just be sure to turn when you see him ready a TP move so you don't heal him. --Zatias 02:58, May 2, 2011 (UTC)

Seems to aggro with True Sound as well. I walked up to it with Sneak/Invisible up and it aggro'd me while I was standing behind it. Adding it to the page. WhiteFireDaemon

Retrieved from "https://ffxiclopedia.fandom.com/wiki/Talk:Ouzelum?oldid=1454834"
Community content is available under CC-BY-SA unless otherwise noted.