http://ff11creatersvoice.cocolog-nifty.com/fanfes/
"4. During the final Einherjar battle, the only way to evade "His" special attack is to kneel and 'pray'. " 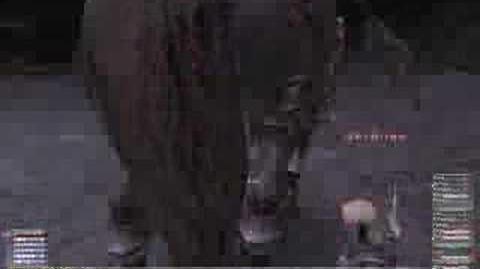 Since we can see in this video that there are monsters named Ortlinde, Gerhilde & Brunhilde and it seems they are as the Odin article says fomors should we add them to the enemy list for Odin's Chamber? -Heretic mkII@ffxi 04:17, 25 September 2007 (UTC)

I didn't add them(I did the major re-sorting of info & added the picture for a comparision of how large he is), because while they do spawn, they do not need to be defeated, and their defeat does not neither make the fight easier or harder. He simply calls them. I did SS what he said in /say before he called them out. But I've missed a few Odins, and I won't post it until I see if there's a correlation between what he says, and which tier group he calls.User:Tarstark Anyways, I just don't see the point of adding them, when there is so little info known about them, and there will always be a lack of info. No approximate lvl, drops, TP moves of their own. Instead, they are just tied to his HP. They don't need to be defeated, unlike Kirin or Bahu V2. mobs. So, why bother defeating them, when the time frame already is cutting you short.

In the cutscene in the Halzam Testing Grounds, Odin's name is given as "Odin Prime" This seems to hint at the possibility that he might be summonable in the future o.o; *ish scared* --Lordshadow 18:20, 6 November 2007 (UTC)

I fight this guy every 4 runs, I normally go as my ranger - Odin is extremely squishy - I go as a RNG/DRG for reference.

Only problem with odin is hate control since its fairly easy to cap hate. A thief in a ranger party using collaborator once a min per ranger usually means you get a collaborator once every 4 mins (-25% Hate), with High Jump (-33% hate) I can pretty much never pull hate... However this is only "pretty much". Even with the hate reduction from these abilities its still very easy to pull hate on Odin after a time. A lot of the time the RNG/SAM and RNG/WAR will probobly pull hate meaning odin running to the RNG pts and using some damn AOE move binding/blinding/dispeling or some crap which can play hell on your healing support depending on your setups. (And yes before anyone mentions the whole /drg thing I do pretty much parse as one of the top DDs and even with the hate reducing tools I still CAN and DO pull hate. /DRG doesnt ensure you never pull hate. Just allows you to open up a little more than you ordinaraly would.

All in all Odin is easiest of all the Einherjar Mega Bosses. Think of him as a Tier 1 Boss - just dont get cocky. He can and WILL own you should you not respect him.