"During double-earth weather, if kiting, it will temporarily lose hate on kiters, and go unclaimed."

This is simply false, we've kite for many hours on numerous occasions, this has nothing to do with weather, if you are kiting, and don't do something to keep hate on it, he will simply lose aggro like all mobs. Hardlined 20:03, 11 December 2008 (UTC)

I've had the complete opposite happen to us on several occasions. When double Earth weather is up, his hate list does not behave as it should. We have had him randomly go after people who have not done anything whatsoever for 20+ minutes whilst the kiter is still performing actions on him. We have also had him depop after kiting for 3 hours when it went from double Earth to no weather. This was not a case of losing aggro either as the PLD kiter had cast Flash on him about 2-3 seconds prior to this happening to prevent it going after a mage due to the messed up double Earth hate. Double earth weather does cause unexpected behaviour in his hate list. I'm not claiming to be the most informed person on KV but we've definitely seen this happen on numerous occasions and have killed ~20 KV's as a LS. Jem - Asura 18:22, 14 December 2008 (UTC)

@ Hardlined- What you probably did not realize is your mage had some form of DoT on him. I've held KV many many times, and what I've learned(from others experience combined with my own) is that during double earth weather, if no DoT is on, he will randomly turn white. @ Jem, the reason for your hate not behaving as it should is because KV hate caps almost immediately. I found this out when, after holding for a while, but doing next to nothing as i was looking for people to come kill, I ran in and burned my tp with atonement and it hit 750. this was after about 45 minutes of holding and all i had done was a couple cure 3's and 2-3 flashes. RDM was kiting the entire time. And this isn't just during double earth, his hate caps during all weather, even no earth, and hate control is sporadic at best. --Tds28903 09:43, February 15, 2010 (UTC)

Curious, if the weather stops and he disappears is that technically his ToD? Never dealt with NMs like this before and I want to keep an eye on ToD for myself and LS. Can someone enlighten me? Dathus 09:50, 11 July 2008 (UTC)

I'm fairly sure he doesn't aggro. I haven't had the pleasure of /poking him myself, but i've seen screenshots of people standing around him without S/I, and him showing no signs of aggro, so I doubt it.

I was curious of anyone familiar with this mob, does the draw in ability affect members outside of the alliance too or just inside the alliance (or whoever may have some sort of hate)? If it does not affect outside members that don't have hate, please note that on the main page.

Also I put in the notes a chance of multiple drops of Venomous Claw since someone had multiple written in the drops section how I personally can't verify this claim so I put a verification tag on it too. If anyone has experienced multiple drops for the claw, please feel free to remove the verification flag and note it on the talk page. --Wayka 21:42, 31 March 2007 (EDT)

Somebody put in another instance of a multiple claw drop, so I put back in verification. I personally have never seen it. Also, I flagged the line about chocobos too, you can't have hate if you're on a Chocobo. --User:Charitwo/Sig 18:09, 10 June 2007 (CDT)

removed verification tag from the chocobo line, he definitely draws in on a chocobo even from the rabao zone line, and you will take aoe damage. --Jerm 22:01, 13 June 2007 (CDT)

Ok just putting in my 2cents here. I have camped this thing consistantly for over a month. Tracked time of death, spawn times, drops ect. Have not seen him drop a V.claw at all, the whole time i have been in west altep, and have seen him go way beyond 24hours to pop. Watched him go to 36 hours from death, skipping multiple single and double earth weather. I dont know if he can go past 36 hours, but he can defintally go beyond 24. Not happened just one day, but several now. Can spawn as early as 21, but 24 is not the limit, and he has no apparent force spawn. Also have noticed that every time it pops, it will pop when a weather begins, not randomly during the weather, could be somethign i just missed, but that is waht i have seen the vast majority of the time.

He will automatically gain hate and draw-in anyone in party/alliance with someone that has hate/claim. any action taken from outside that would get you hate, will also spread that hate to outside party/alliances. He does draw in dead bodies and chocobo's from all over the zone. Fwolf 22:48, 11 November 2007 (UTC)

It is very possible to sit and straight tank this NM, I constantly do it on NIN/DRK, landing Kurayami, Hojo is crucial as the effects on the NM are significant, I've even just recently held the NM successfully as NIN/DNC TPing on the NM itself while holding it for 300%TP before disengaging and preforming an action right away so it wouldn't go white and deaggro, the only downside is that you should not do this weakened.

Anyone who is not a PLD/NIN or RDM/NIN shouldn't really have a reason to run from the NM, it's easy to hold, and if you don't have that kind of talent/skill to actually pull of such a maneuver, then I think its time to stop playing NIN(Leibon[1])

I ride out very basic gear, majority of it is AH gear, which runs about 800k on most servers, quiet cheap for a set that can make you look relatively good in front of retards who claim it when it goes white and dont even have shadows up and get pwn'd cause they lack the knowledge of getting :Ni up(Leibon[2]).

Because Wiki is 100% based on user experiences, please don't edit others drop rates. If you cannot 100% prove they are false, you can't edit the drop rate to reflect this. 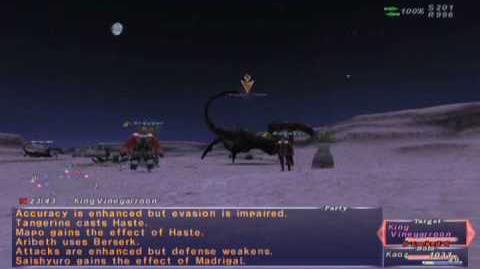 I recently went to Altepa for a ZM, and ran over to KV to mess around when it popped on top of me during a double earth. I held the NM as NIN/DNC effortlessly til a Kannagi NIN/WAR and WHM arrived. Easily Trio'd til 25% until the dmg/poison spam was too much for the WHM who died. NIN/DNC and NIN/WAR duo'd extremely easily under 25%. -Erikthecleric