Can be solod by 80NIN/DNC wearing evasion gear.

mostly only hit by AOE or conal JA (numbing breath & earth pounder), need remedy for paralyzed effect from numbing breath. Stoned status effect duration from break is random. bringing an extra mage whm/sch for stona or brd for march makes it much more easier. bringing to many DD is not a good idea, as its move is TP based + auto 100%tp after mighty strikes, it will easily wipe the melee.--VC-Hijikata 10:11, April 30, 2010 (UTC)

soloed on dnc/nin. died twice pre-80%(bad luck with break) but got a feel for it by the 3rd attempt. used sushi and rarely missed, alternated stutter/box. During mighty strikes break is insta-cast so there's always a little luck involved there with dbl atks+break...under 20% mighty strikes is spammed and it gets quite intense. recommended for a challenging solo

Killed this the other day and it used Mandible Bite immediately after using Mighty Strikes. It might just gain 100% tp when using 2hr preferring to use Death Scissors or Wild Rage --Rues 01:24, July 19, 2010 (UTC)

Happened again immediately after making this comment, also have a screen shot. 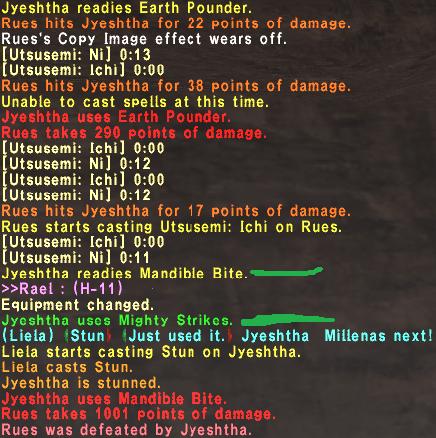 Easy solo as 90NIN/DNC, keep at least 1 shadow up at all times, if you see mighty strikes, start casting another Utsusemi as he seems to like to followup his TP moves with instacast Break. Always had Ni ready by the time he took off all shadows, Blind and Slow landed with little trouble. Got hit once during mighty strikes for 400 damage, do be careful of that. --Nattack 01:25, April 21, 2011 (UTC)

Easily soloed as 95NIN/DNC, only died once due to getting hit with Break. The rest of his moves are easily managed just dont let break land and you have nothing to worry about. Id usually use my stun on Break even when I had shadows just in case because thats the only worry. He is very inaccurate too, tanked mostly with just Ichi. --LiennaOfShiva 16:55, October 4, 2011 (UTC)

Solo as 95BST/NIN. Looking for the Farruca Fly (also easy solo) and popped the scorp. As long as you keep two shadows up, you basically never get hit with it's TP moves, and your pet holds all the hate. So it's OK to fight along side your pet (stand behind the mob!). --Eisenzahn (talk) 16:58, August 14, 2012 (UTC)

Easy solo as PUP99/NIN with WHM puppet. Keep shadows up as much as possible to avoid Break. Wild Rage will cause some problems for your puppet, as it's difficult to keep it out of range, so make sure it heals itself. Also make sure to recast shadows at this point. As usual with PUP, be sure to de/reactivate it for MP. Otherwise Break will stay on until it kills you. Yrusama (talk) 12:17, November 28, 2012 (UTC)

Popped it just East of the OP in West Sarutabaruta. Popped Directly North of Cavernous Maw in West Saratabaruta [S]@H-8 & I-7 Popped by Stone Monument in Meriphataud Mountains @ J-10. 19:08, January 5, 2012 (UTC)Prophett on Quez.

Solo 90Nin/46Dnc. I kept Ni up easily , steps up for Violent Flurish for stun, only casted a few times. Used Yurin: Ichi and all enfeebs. Everything stuck. Took about 5 minutes. easy solo!

Retrieved from "https://ffxiclopedia.fandom.com/wiki/Talk:Jyeshtha?oldid=1418351"
Community content is available under CC-BY-SA unless otherwise noted.