Back to page
View source

I can't seem to find any targetable miasma. I've been longing everywhere on the west and east side. Anyone got a location that contains a targetable miasma? --Jammie 08:29, September 13, 2010 (UTC)

I found mine at the top of (E-8) near where the Antlions are. --Kevingood17

Can people list more places they found it? I checked all over both of those areas and found absolutely no targetable miasma :X Orenwald 18:42, September 19, 2010 (UTC)

This quest is the devil. I think there's only 1 targetable Miasma and it moves around. I saw one on top of the mountain on the north side, and it disappeared as I was running to it. Several people have spent hours looking for this. --Car.Masenko 05:28, September 22, 2010 (UTC)

This quest sucks. Spent 6 stones looking for a Miasma cycling through the aforementioned areas and nothing. My advice? Get the quest and whenever you're in the zone just check the one near the spoor until it's there.--Nombly 07:40, October 8, 2010 (UTC)

I thought it was one of the two that are always there north of J-10 but its not. It is a few yalms north of the chocobo spoor, on the cracked ground after the rock, it appears and disappears. Not one of the permanent miasma clouds.--Aebish 20:03 Oct 8, 2010

Does a watched pot ever boil? Answer: yes. I had seen Dark Miasma spawn on Parradamo Tor (from conflux 07: up the left hill from the Hume Female Resistance Fighter, then up to the right and the crack on the left) one time when I was repeating the quest "Looking For Lookouts." So I went to that spot again and camped it ... for 157 minutes total. Yes, I used 5 stones total, and when I switched stones I had a friend watch the spot to see if it would pop while I'm gone. My thoughts: more research needs to be done on the nature of the spawn points, and/or Square Enix just needs to make this quest more manageable. My personal theory is that there are 8 spawn points for Dark Miasma (I personally know of 6), and that they cycle and only appear once a day. Mine appeared on lightsday at exactly 12:00 noon. Others completing this quest, please report day/time and spot. Let's figure this one out to make it easier for others. Tonelico 17:35, October 17, 2010 (UTC)

-Tonelico, could you share some screenshots of the areas you found it at, and positions to go with them?

spotted it at 23:15, lightsday, last quarter moon 52%, west of the resistance fighter at the foot of the mountain's south side, <pos> J-9. It blocks the only path that can go south in that corner. I too tried to trade and when i completed the trade it just disappeared and did not use my counteragent. I think it may be possible that it may fail to work and end up having to try more than once try, as like what happened to yeffeble happened to me. Absolutezro of Bahamut 06:04, October 24, 2010 (UTC)

One thought. Leepe-Hoppe at base camp tells you what the air quality is. I keep getting "...It's quite clear today, oh joy and glee!" Perhaps the message changes when its up? If its a day-to-day thing. It would explain the very long waits for some users to find the damn thing. Update: Ive checked this NPC day by in-game day and never once has it given me a differnt message then one one listed above, I now doubt this NPC has anything to do with the air conditions in this zone. Darkovercast 03:46, December 12, 2010 (UTC)

I finaly found a miasma after many trys to gain it, I don't even want to think about how many stones were used in this quest. I found mine near the hume and tarutaru resistance fighter, its very, very noticeable when it spawns, i gave it about five seconds before i traded, and it vanished right after. It was at 8:00 in-game on firesday. The moon was 40% Waxing. The best advice I could give, is after an exp party when your sitting on a lot of time your going to not save, go camp one spawn point, and don't move, have a /item trade macro ready, and just wait. Darkovercast 16:45, December 28, 2010 (UTC)

I found one dark miasma at J-8 going up the Parradamo Tor as explained in its own page for the original Atthowa Chasm, its the first disappearing miasma. The first time i saw it vanished in few seconds and was unable to trade. Went there an other day and waited for one entire game day, it was lightningsday and the dark miasma appeared few seconds before changing to lightsday (23:55). As described in the counteragent, the miasma is dispersed upon trading it.Souf 13:16, December 16, 2010 (UTC)

Followed the Screenshots by Darkovercast, waited about 150min total, popped 16:30 on Lightsday. Since it's going to be a long wait regardless of if you run around or stay in one spot, seems better off to just grin and bear it and wait it out. Mystile 23:16, January 9, 2011 (UTC)

Camped the spot by the Taru Resistance Fighter on Fireday and it spawned at 2:52.

At some point in the last two weeks or so (at least on Unicorn server) these Dark Miasmas went from super-rare to literally -everywhere-, enough to seriously hamper my LS's runs the last couple times. I'm not sure precisely when these things started appearing more often than Cauldron lava vents, but they've become a serious annoyance now. Tristan Kain 07:23, February 6, 2011 (UTC)

I just changed this from Reputation 4 to Reputation 2. I have just barely hit level 2 fame here - Mendi (A) tells me "Delsinax, eh? Hmm... That name is vaguely familiar. But I'm afraid few in the chasm have heard of you. If you keep doing whatever you're doing. I'm sure more of the survivors will come to seek your help. Good luck." - and I was able to flag this. This is consistent with what's on the main Abyssea - Attohwa page anyway. Delsinax 19:35, February 5, 2011 (UTC)

I just got levek 6 fame in this zone and I can't get him to give me my quest, I only did the chocobo quest and ward warden 1. I guess this quest has a prequest which isn't listed on the page. The other quest I did too was the other abyssite quest of the zone. FJZB2 20:05, February 5, 2011 (UTC)

Makes sense. I'd done Something in the Air just prior to attempting this quest, which fits with what you'd observed. I didn't have to zone first. Delsinax 03:10, February 6, 2011 (UTC) 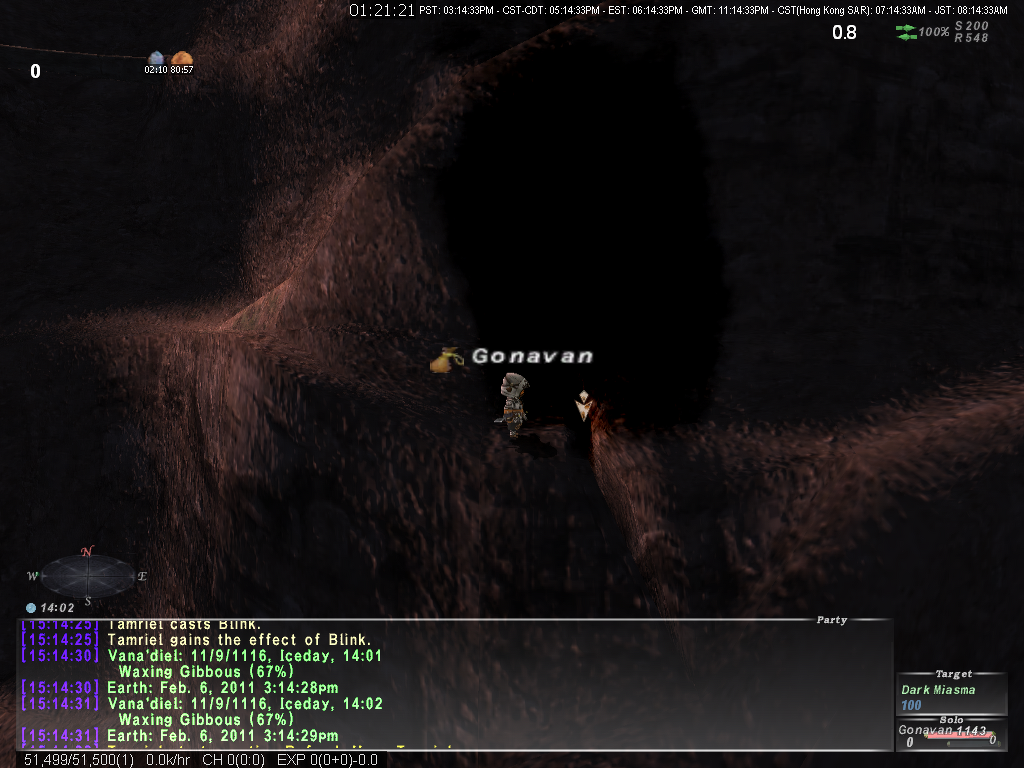 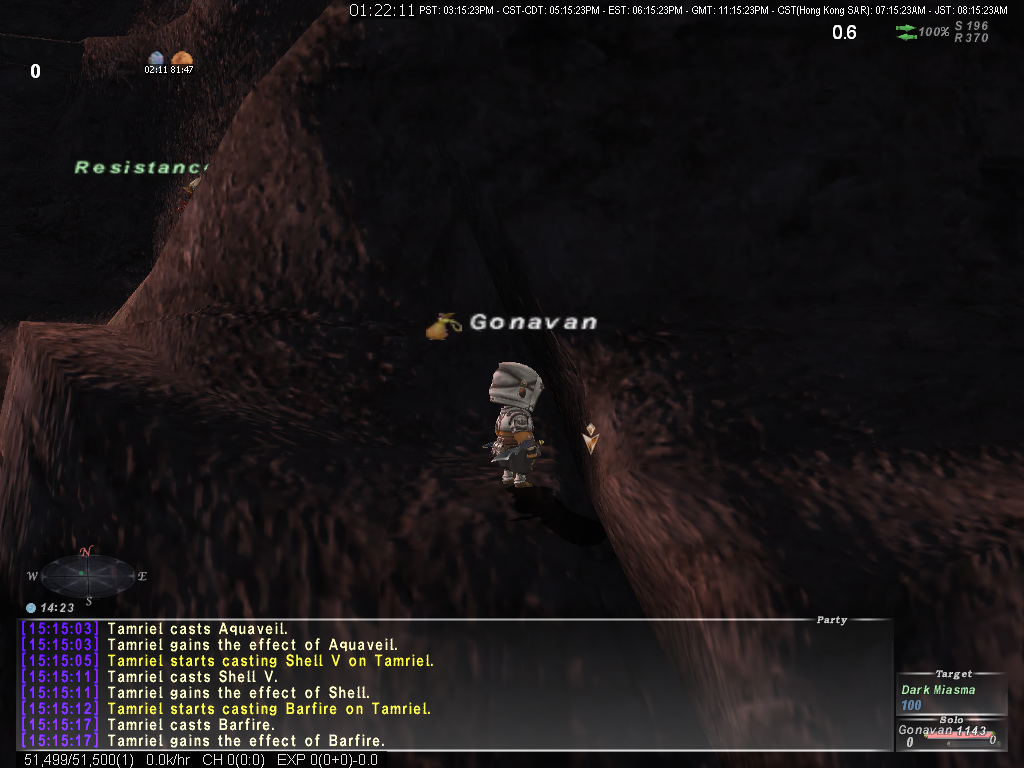 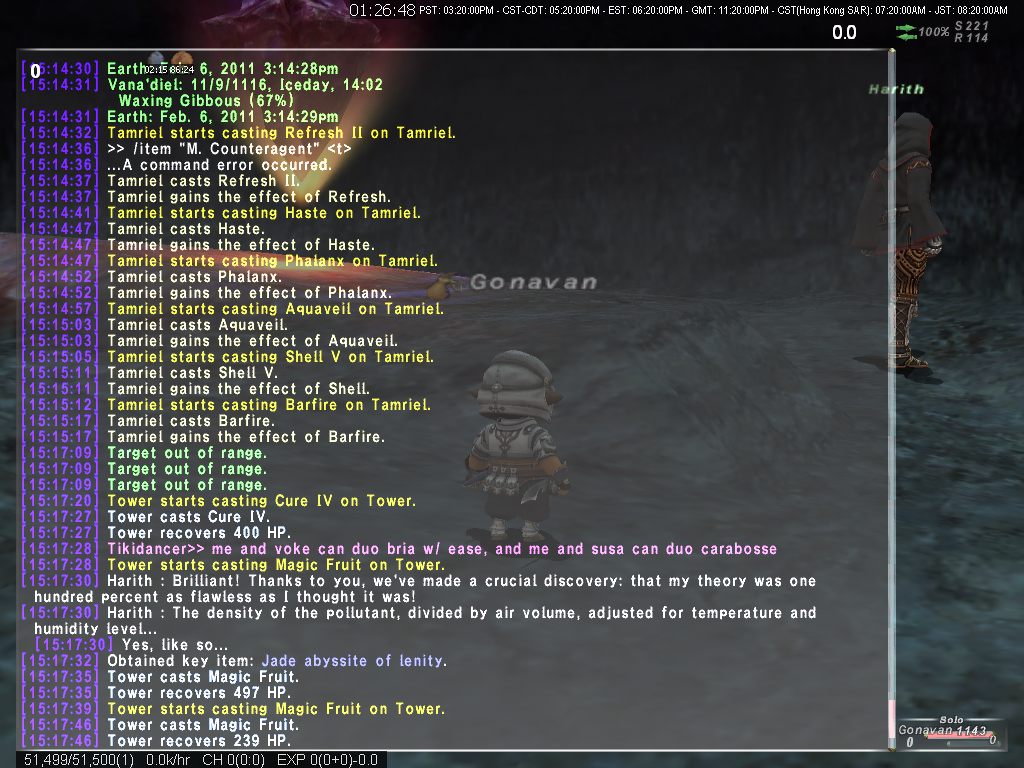