The description of this attachment sounds like it's a Phalanx effect.

Interesting that my old data does correlate with the new formulas. I guess if I'd looked at it a bit closer I could have worked it out. I still think this attachment is mostly useless, though. If your puppet is getting hit hard enough where this would make a difference (for the...all of 1-3 hits it would survive), why not just use Schurzen and/or run away... SnickySnacks 19:10, 2 April 2009 (UTC)

At least in theory! According to the formula on the main page I have modelled damage reduction against damage done as a percentage of max HP. This gives the graph below: 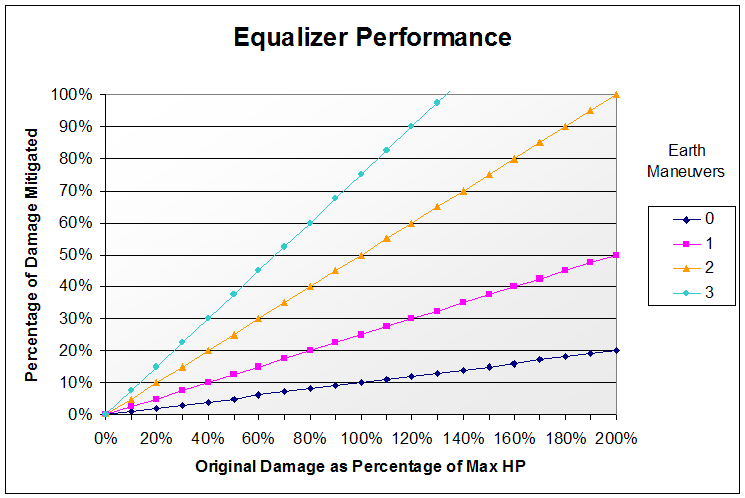 1) the equalizer will help prevent your Automaton from being one-shotted if it is at full HP
2) the equalizer is most useful when your automaton is likely to take very few HIGH damage hits, such as versus Avatars or AoE, and its health can be quickly restored to 100%.

Finally, this is difficult to confirm, but it’s possible that if damage exceeds the Maton's max HP and the Automaton is at max HP then the damage taken maybe mitigate further. E.g. with 2 maneuvers up, the damage mitigated if automaton is at full health is 50%. If the automaton has 200 HP and takes 400 damage then the attack would be completely nullified. However, the maximum amount of damage mitigated is probably capped at 50%.

I don't think the equalizer works on magical attacks, so it may not even help for astral flows. I'm not sure exactly what it works on though, since it works on 1000 needles. If you have evidence to the contrary, please post about it.

The damage taken can exceed the max HP. This was confirmed in the Japanese source (link is in the article). A 500 damage hit to a puppet with 454 health only did 90 damage (82% reduction) with 3x earth maneuvers.

The equalizer was actually of great interest, as far as attachment testing goes. I strongly criticized KI's PUP FAQ, because they quoted the equalizer as reducing damage by 5%/15%/30%/45% for 0/1/2/3 maneuvers. I argued that these numbers did not hold true, unless the puppet was taking exactly 1000 damage (and as it turns out, the puppet requires exactly 1000 max HP as well). After confronting them, they still refused to delete the figures, claiming they were an upper bound. It wasn't until the Japanese found it was based on max HP, that we could finally say the statistics were bogus. The figures for the attuner, target marker, and smoke screen were also based on erroneous interpretations from this attachment's data. The lesson of the day is you can't trust a statistic without a source link. I try to post them on here whenever possible. --Nateypoo 18:10, 10 September 2008 (UTC)

I don't have new data. As I said I have simply modelled the functions shown on the previous page to give a more visual representation of the effects. ---- dibble 22:08, 10 September 2008 (UTC)

So I decided to give this data an extremely simple test run. I got on a level 1 job and subbed PUP, giving it the Equalizer attachment. The general idea was that with two earth maneuvers, a Colibri in Wajaom Woodlands should generally be doing 0 damage to my puppet consistently (based on its max hp of 30.) So sure enough, I put up two earth maneuvers and have the sharpshot frame run out into the woods and poke a colibri.. and the Colibri one-shots the thing for 34 points of damage. I'll admit it is an insane damage reduction because i punched the same colibri soon after, which dealt me 350 points of damage exactly. However, the theoretical statement that all damage can be nullified is, at least from this test, incorrect. Feel free to post snapshots if you can say anything to the contrary though --Coronawolf 02:23, April 13, 2010 (UTC)

Retrieved from "https://ffxiclopedia.fandom.com/wiki/Talk:Equalizer?oldid=1112107"
Community content is available under CC-BY-SA unless otherwise noted.