Back to page
Edit

Edit: This paste just raised my chick's receptivity, which was a shock. On day 10, with care plans focused on mental stats, all stats checked as "Poor" before feeding two Carrot Pastes. Immediately following, RECP had gone up to Substandard. Could this paste possibly affect all stats? --Lastarael 18:16, December 4, 2010 (UTC)

Screenshot of my Carrot Paste surprise 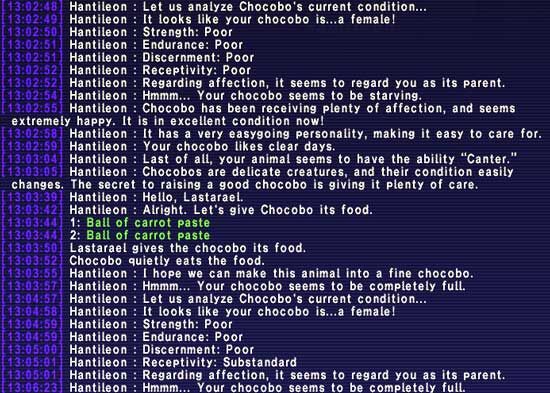 It seems to lowers affection. Though, my chocobo simply "Eats it", doesn't munch in it.

ps: well there's nothing much to "munch" on since its paste ^^;

Can you provide evidence that it lowers affection during chick stage? I fed mine one every day and had no problem with affection. Also, it is my understanding that different chocobos enjoy different foods. Whereas one chocobo may favor these, mine just ate it. I'd be interested in hearing from someone who had a different experience. --Lastarael 16:59, November 19, 2010 (UTC)

It definitely lowers affection when fed during adolescent stage. Fed it 5 paste and affection went from regards you as parent to want to be with you all the time. --Kyonne 01:40, November 1, 2009 (UTC)

This actually makes sense, to me. You fed a "teenage" chocobo baby food! From Square's standpoint this is actually pretty sensible. This is why I've been feeding my first chocobo chick carrot paste instead of vomp carrots right away -- I figure it must exist for a reason! --Calliste-Siren 20:56, August 19, 2011 (UTC)

I know this might sound weird, but having done some testing, it seems like this paste increases ALL attributes. I know that sounds weird, but I have found traces of that everywhere. Then again maybe my methods of research were wrong to begin with. In any case I had read some FAQs done by people who committed even more time to this, and they don't see this as a smart food to feed a chocobo to. Instead of pastes, they insist on the Adult chocobo food. --FarelTheGecko (talk) 17:45, January 19, 2016 (UTC)