The functionality is interesting to say the least. The Turbine doesn't actually give a barrage effect (i.e. multiple hits) but instead deals larger damage, proportionate to the Wind Maneuvers. Or so it seems.

When tested on EM and T mobs the difference is very noticeable, up to 10x standard ranged attack damage. However, one level 1 mobs, the damage is almost 1:1 identical to normal Ranged Attacks at 3x Wind Maneuvers. In fact, a subsequent ranged attack outdamaged barrage by a few points on another level 1 mob.

Perhaps instead of barrage this is a simply a ranged attack that somehow has different damage calculations based on level difference, ignoring stats, etc. Interested to know the full functionality of it. --Coronawolf 19:39, May 16, 2011 (UTC)

This is incorrect. If it did not give barrage effect, it would not allow for multiple skill ups as shown below: 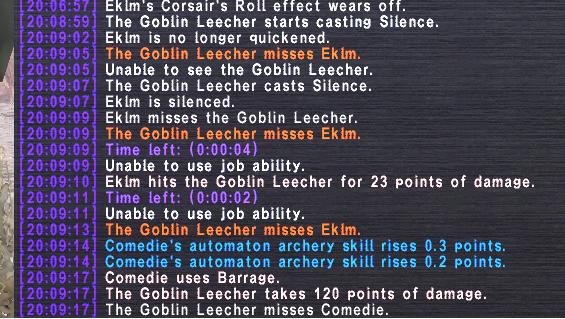 Retrieved from "https://ffxiclopedia.fandom.com/wiki/Talk:Barrage_Turbine?oldid=1365917"
Community content is available under CC-BY-SA unless otherwise noted.