Back to page
Edit

Is this quest repeatable?

Because this is considered a quest, Experience Points ARE lost in this BC (similar to Divine Might)

I think this statement should stay (or something similar). The page, literally, has "mission" written all over it. And there is the fact that it advances you to the next mission in the mission log. --Beaux 06:44, 8 September 2007 (CDT)

Eminent Scimitar, Eminent Shield, Outrider Mail Set all Item Level 117. Forgot to change my sub, but stoneskin and refresh didn't hurt. Ridiculously easy fight. Just beat them to death. Killed Eald'narche first. After getting my first 1000 TP off of him used it on Kam'lanaut. Took him down to a third. With another 1000 TP took him down to less than 10%. A few more hits then dead. BearstarSeraph (talk) 04:18, August 5, 2014 (UTC)

Eminent Voulge + Outrider Mail Set Item Level 117 + no food + 1 Hi-Elixir. Started fight unbuffed, used Boost, Warcry, Beserk, Dodge, Focus, Chi Blast, Retaliation, Restraint, and Mighty Strikes, focusing all attacking on Kam'lanaut entirely until he was KO'd. After Mighty Strikes wore off, Used Brazen Rush. After Brazen Rush wore, I had Kam'lanaut at about 10% with 125% TP, at which point I chose to hold from using Raging Rush and saved it for Eald'narche. Once Kam'lanaut was down, I was at about 900+ HP when I was hit immediately by Eald'narche with a weapon skill that dropped me to 146 HP. My Hi-Elixir use beat his spell cast delay by milliseconds, and I survived a Firaga III from him leaving me at 900+ HP. Immediately hit Raging Rush with Restraint still up for 3100+ damage which one-shotted him to a knockout from what I had him wore down to. During the fight, Eald'narche for some reason decided to spam teleporting right behind me in melee range, to which I maintained target lock on Kam'lanaut and 180'd into a potential Counter position. He did this multiple times when I stopped in the 180 position. I just kept 180'ing back to a Counter position. Between the Counter trait and Retaliation ability, that's probably how the first 1900 HP of Eald'narche's estimated 5000 HP came off with the procs occurring when while I was busy with Kam'lanaut. -Holthaus (talk) 22:47, June 17, 2014 (UTC)

very easy fight took roughly 3 min. I used basic Bluemage buffs nothing special (occulation, metallic body, and refresh). When I started the fight I let Eald'narche teleport too me and used "sudden lunge" on him right away and began to zerg with goblin rush, quadratic, heavy strike, and delta thrust. The stun wont last long so i staggered with "headbutt" when cool down was needed. up until Eald'narche was dead I basicly ignored his brother and recasted occulation as needed. Kam'lanaut was an easy fight do to the lack of spell that he uses and lack of resistance to sudden lunge. all in all easy fight.

I had -11 Avatar Perpetuation Cost gear with 3 refresh / tic. I went after Eald'narche first with Garuda and within 2 Predator Claws he was down. it did take a little bit with all his warping around to get the 2 off, but he did go down. Got Frozen once by Kam'lanaut and within that time, he took out Garuda and took me out too, but luckily I was in a safe spot to raise, waited to unweaken for MP, and sent Garuda after him again. I took about 5 Predator Claws plus a couple re-summons in between but stayed max distance away besides for casting Blood Pact: Rage. All in all it took 17 minutes to get them both down. User:Whoohoo

Used Scissorleg Xerin. Amchuchu, Morimar, Joachim, King of Hearts, Lilisette II (my "go to" team). Made Pet fight the little one, while the rest of us took the pld one. Clear time 2m6s. Nothing really to say. 117 Axe, 119 Head/Legs/Feet, 109 Chest/Hands. User:Rslogic

The prep is probably overkill but like to be prepared.

Prep before battle: TP'ed up to 175 before entering fight (tp goes through) with 5 steps up, No Foot Rise timer up and shadows up.

Battle: Used Haste Samba then fought Eald'narche first using Evisceration, Reverse Flourish then Pyrrhic Kleos to make dark sc. Immediately used No Foot Rise, then popped Icarus Wing for another Evisceration, which should bring him close to death. Keep steps up for stunning agas and erase silence. Kam'lanaut is easy to take out from there.

Finished fight in a little over four minutes. Enjoy!

Got 300% TP before fight using Hannibal's Sword. Buffed with Animating Wail, Occultation, and Battery Charge. Started with Sudden Lunge to hold Eald'narch still for skillchain, which killed him. Then stun lock Kam'lanaut and burn him down with mp. Incredibly easy.

Easy duo now that level cap is 95. 2 x SMN was easy, just make sure to get Eald'narche out fast. Two Predator Claws should take about 90% of his health. Once Eald'narche was dead, Kam'lanaut was completely solo-able by a single Summoner. Didn't even need to re-summon pet. I did try soloing the entire battle first as Summoner, but it is difficult to kill Eald'narche as Summoner while kiting Kam'lanaut since Summoner's have such weak defense. Could probably accomplish it with multiple tries, but duo'ing makes it so easy it's not worth the effort. Kathious September 27, 2011.

After Eald'narche is dead then just let NN take out Kam'lanaut like we do with any gimpy NM. Fight took me about 6 mins.

- Confirmed, I solod with Bst/Whm90 using sheep. Took 2 sheep and 2 reward, with no pet def or pet food enhancing gear. my pet did die when kam'lanaut was 5% so i joined him to wear him down as much as i could for the last 10%. you definatly want ealdnarche to die first; 1 of those nukegas can take you out. Dont realy see how any other job can solo this at this lvl either, but thats just my opinion. Absolutezro of Bahamut 01:57, April 23, 2011 (UTC)

Just did this fight as a 99 bst/dnc. using mostly perle gear, +1 af3 head and legs. I went into the fight using Faithful Falcorr keeping him targeted on Eald'narche was a bit annoying but fairly easy a few stray agas caught me off guard but no big deal. used back heel twice on him and he was done for. switched to Kam'lanaut, used reward (pet was at roughly 50% health) and let the pet go to town. by the end of it pet had 75% health. The need for food I dont see as a must if you have a decent geared bst. Lenght of fight was 6 mins and 9 seconds. Twjester/Carbuncle 7/5/2012

Right off the bat, I want to stress the importance of Poison Potions. With them, this fight is exceptionally easy at 90. I went in planning to 2 Hour Eald'narche while cure-bombing myself, however I ended up not needing to use my 2 Hour at all. I put up Pro/Shellra V, Afflatus Solace, and the usual buffs. I used Poison Potions on both characters, and finally activated Sentinel (MNK/PLD). I sent the MNK in to aggro both enemies, and I engaged Eald'narche. He teleports frequently, so be sure to keep him locked and just keep chasing him. Hermes' Sandals helped, but aren't at all necessary. Every attack round took a good chunk of his HP, and he went down after one Asuran Fists. He used one TP move, Omega Javelin, which did very little damage and just required a quick Stona. His spells did very little damage with Sentinel, and Sleepga II is no danger with Poison Potions. After Eald'narche died, Kam'lanaut went down very quickly. My WHM did three things throughout the whole fight: cast Stona once, recast Stoneskin once, and Cure IV once. --Kekoa 06:36, August 2, 2011 (UTC)

Went in RDM/DRK WHM PLD SAM SAM WAR. Chainspell stun the kid and have the PLD pull hate on other boss and kite. War used 2hr. Killed kid within 30seconds and zerged the other boss, Sam were doing SCs. Win within 3:01 minutes. I was on WHM and used no MP aside from hasting the people.

The CS with Aldo seems to suggest there is a connection to the Nightmare Dynamis storyline. Has anyone who has completed this and Dynamis - Tavnazia gone back and checked if there is anything new? --Toksyuryel 04:41, 24 September 2008 (UTC)

The ending cs of Dynamis-Tavnazia varies depending on where in the story you beat it during. The final version of the cs which only becomes available after your receive the earrings from Gilgamesh does hint strongly that Lion is the dreamer. That combined with the Gilgamesh cs itself, makes it 100% the dreamer is Lion. BearstarSeraph (talk) 04:27, August 5, 2014 (UTC) 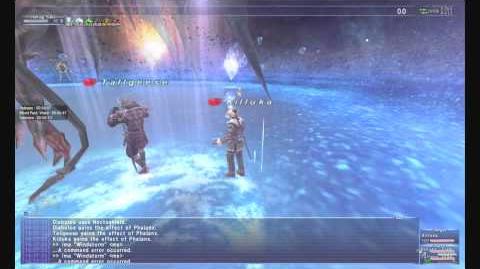 Soloable at 95 on BLU. Just open with Unbridled Learning Thunderbolt to stun both of them, zerg Eald'Narche, then Azure Lore zerg Kam'lanaut for a quick, easy win. --Eremes 01:49, October 16, 2011 (UTC)

I must agree, but don't forget at the time the maximum level was 75. Now at 119, it is an easy fight. Like Killuka, I too overestimated the fight and took the time to bring out five (5) Alter Egos, buff, etc. All I needed to win was Fenrir's Eclipse Bite and Impact and a few hits of my staff. I might go again and skip the Alter Egos and buffing. --IBHalliwell (talk) 09:11, August 16, 2015 (UTC)