Must have completed CoP Mission 4-3 (in order to have Sacrarium access).

The Swift Belt is a great piece of equipment which can't be bought; you will have to work and fight for it.

“This aged book is said to contain the tragic history of the Fomors. However, you cannot read the cryptic characters that fill the pages.”

Fomor Codices are used to spawn the NMs which drop the Swift Belt. You can buy these from bazaars, but they can also be farmed quickly and easily from Tauri in Phomiuna Aqueducts and not so quickly from the ones in Sacrarium.

Tauri are Demon type monsters which have true sight aggro but do not aggro to sound; however, they do link. Their only special attack you should worry about is Mortal Ray, a Line of Effect attack that inflicts the Doom status (10 seconds countdown before death). However, Mortal Ray only works if the victims are facing the Taurus, and it takes 2-3 seconds to go off; it can be easily stunned or the target can simply turn his back to it. Fighting Tauri while not using the target-lock is the safest way to do it so you can turn your back quickly.

If Mortal Ray lands, just keep using Holy Water one after another until Doom goes away. On average, it takes ~3 Holy Water to remove Doom; Cursna works too although it isn't 100% effective either.

Fomors are undead and as such are immune to Drain and Aspir spells and have high dark magic resistance. They aggro to sound and low HP; their low HP aggro distance range is significantly shorter than of other undead, though. They don't link unless they are partied -- if that's the case they will move together.

There are just a few things to bear in mind about Fomors. Melee Fomors are strong; even damage dealer job Fomors have quite high defense. Any Fomor wielding a two handed weapon may use a special move called Grim Halo, a quite powerful Area of Effect attack which can almost kill Tarutaru mages at full health when used by Fomor Samurais, Dragoons and Dark Knights. Fomor Monks have a special ability called Shackled Fists, a very powerful single target attack - if you have a Ninja tanking a Fomor Monk, keep their health as high as possible.

Like Tonberries, Fomors know how many of them you've killed -- if you've never killed a Fomor, they won't aggro you at all. Fomors have a couple of attacks that do more damage based on the amount of hate you have, but they are nothing to worry much about. You will need to have maximum Fomor hate in order to spawn the NMs which drop the Swift Belt; you can check your Fomor hate with Resauchamet on the top floor of Tavnazian Safehold. He will tell you one of the following in his second to last line of text:

Getting maximum Fomor Hate is simple enough -- you can do it easily in Lufaise Meadows, or, a bit harder in Sacrarium while farming the subligars required for the JSE 50 body pieces at the same time. 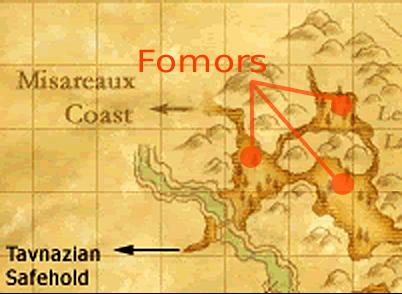 Fomors at these spots only spawn between 20:00 and 4:00 hours in-game time, meaning you have 20 real-world minutes to kill as many as possible. They respawn after 5 minutes so it isn't too difficult; if you kill them all 2 times each for a total of 20 killed Fomor, you should be very close to having maximum Fomor hate. They are partied, though, so bring your full Swift Belt group here and move together to kill as fast as possible, then move to the other camps while they respawn.

You can clear Fomor hate by killing Orcs and Gigas in Lufaise Meadows and Misareaux Coast, killing Tauri might also reduce Fomor hate.

There are a few Pugils and Slimes between the entrance to the Phomiuna Aqueducts (J-11) and Tauri camp A. The slimes aggro to sound. In the first camp, there are 3 Easy Prey to Decent Challenge Tauri (to level 40 players) and 3 Bats. The Bats are not aggresive. Nothing on the way between Tauri camps A and B aggros, but the Tauri in camp B are Very Tough or Incredibly Tough (to level 40 players); still, if you have the numbers for it, (at level 40) you can kill Tauri nonstop moving from one camp to another. 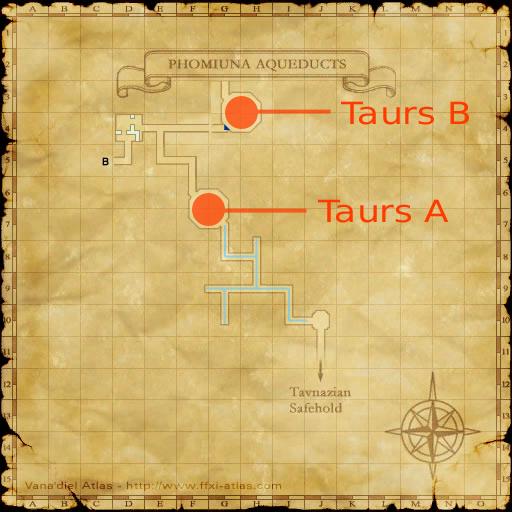 The Sacrarium is a rather small area and it is much less dangerous than it seems. Near the entrance you will find a couple of Tauri, some Gazers, and Bats. Bats don't aggro at all, Gazers aggro to sound, and Tauri aggro on True Sight as usual. It's better if you kill the Tauri before starting so you don't have to deal with sneaking behind them (at level 50).

There are two entrances to the maze, one on north side and another one on the south side. The light-blue walls marked on the map change randomly each game day, but it doesn't matter much; the only walls that matter are the ones right after the entrance points. Only one entrance is open at any given time, but there is always a way to reach exits A and B. 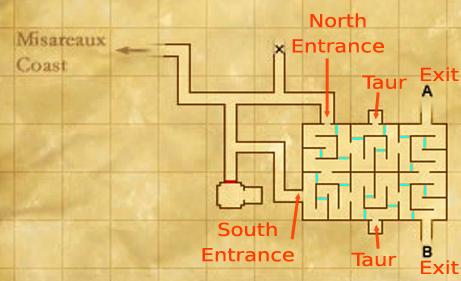 Knowing that walls shift every game day, it's better not to go into the maze when the day is about to change, so people don't get separated by the shifting walls. Once you enter the maze, just keep going east. From exit A you can only reach the Hume room, but from exit B you can access all the rest of Sacrarium, Hume room included. The maze is full of undead -- everyone (below or at level 50) needs to be able to sneak themselves. There is always a good place to recast sneak or use a silent oil, but be careful if the route you are following takes you past the small rooms with Tauri in them; hugging the opposite wall will be enough to avoid aggro (their sight range is actually pretty short).

In the second part of Sacrarium there are 6 rooms, 5 of them belonging each to one race; inside each one of these rooms there is a Stale Draft target, where you trade the Fomor Codex. If you examine the Stale Draft you will get a message according to your Fomor hate: 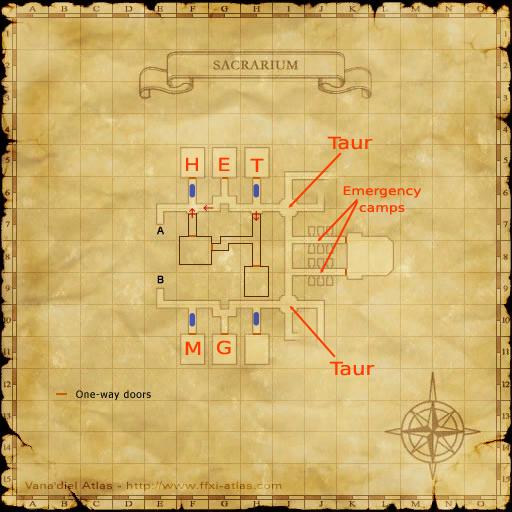 On the map, each room is marked with the initial of its corresponding race. You can check your Fomor Hate in any room, but you can only spawn the Swift Belt NM in the one corresponding to your race.

(If at/below level 50): There are two spots where a Tauri just sits there and walks around changing the direction it is facing; be patient -- there are partied Fomors around so it would be very dangerous to get Tauri aggro. If you get aggro around the Tauri, you can go to the 'Emergency Camps' marked on the map. Fight in the corridor where 6 skeletons are standing - they won't attack you if you don't attack them first.

If you need to build Fomor hate inside Sacrarium, you should do it in the safe camp spots marked in blue; if you fight in the middle of the hallway, on the stairs you will be safe from low HP aggro, both from the Fomors in the room and the ones in the corridor. The best place to build Fomor hate inside Sacrarium is the camp outside the Tarutaru room - Fomor Black Mages and Fomor Summoners are very easy to kill once silenced.

Once you have maximum Fomor hate, you can spawn the NMs which may drop the Swift Belt. Drop rate is around 30%.

A note to the wise: DO NOT POP ON DARKSDAY (*at level 50*) UNLESS YOU ARE IN A BIG ALLIANCE! The NM's EVA and 2-hour are plain evil on this day.

Balor is the easiest of the five NMs. He will use Eagle Eye Shot when you get him down to around 2/3 HP; as long as your tank survives or you have a spare tank the fight will be a breeze. A Ninja tank will do better here (at level 50), as Eagle Eye Shot may kill a full health and well-equipped Paladin (at level 50).

She will use both Ninja spells and Red Mage spells, along with Chainspell.

Luaith is hard for Ninja tanks (at level 50). He hits hard, and has both Double Attack and Triple Attack. Bring a Paladin to tank him.

He is bad news, using both Summoning Magic and Black Magic; worse, his special attack is 'Astral Flow'. He wields a staff, so he can use quite a powerful Grim Halo.

Uses Bard songs and Paladin spells. Watch out for Lullaby. His special attack is Soul Voice.

Once someone with maximum Fomor hate trades a Fomor Codex to the Stale Draft inside the room of their race, the corresponding NM will spawn and the player's Fomor hate will be reduced to the minimum. The Stale Draft will appear again 15 minutes after the NM dies.

Retrieved from "https://ffxiclopedia.fandom.com/wiki/Swift_Belt_Guide_by_Ilean?oldid=1583736"
Community content is available under CC-BY-SA unless otherwise noted.