After looking through my old Project Spirits thread (which has somehow found its way to ffxi wiki o.O), and having recently tested around with my spirits again, I decided to compile the info that was in the other Spirits thread onto this one here because the last one was so messy and kinda hard to read . note: I loved how Jer did his bp compilation in point form so I'll be doing a lot of this in point form too. Feel free to comment, feedback, point out errors or whatever.

The Summoner's elemental spirits have always been a mystery because they are both hard to control and their actions often do not seem to pay off for their MP cost and inflexibility. However, in the interest of playing the job to its fullest, many SMN have carried out extensive research on the spirits and have to some extent discovered the workings of these avatars. (If you would like to see some of the processes and information sources for this thread, it will be listed at the bottom of this post.)

The following picture summarizes the Spirit Timer into a formula and also lists the elemental perpetuation cost across all levels. 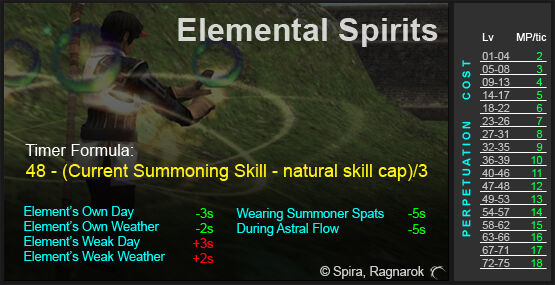 The following points hold true for all elemental spirits.

This timer (usually called spirit timer in short), is the time in between each spell that your spirit casts. While not essentially 100% accurate, the formula derived by players is good enough to be applied all levels and stands correct.

The Elemental cycle spirits consist of Fire, Ice, Wind, Earth, Thunder and Water. They have a set of rules unique only to them.

The following picture summarizes the spell repertoire of the 6 Elemental Cycle spirits. It also shows their elemental relationship. 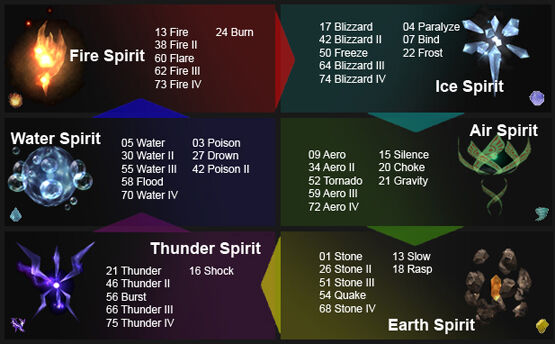 Light Spirit's behavior is unique in that it can be divided into 3 different modes.

Dark Spirit's behavior is also unique. However, due to its huge spell repertoire and randomness, it is hard to fully understand it. It also becomes kind of useless because it is the least able to be controlled.

The following picture summarizes the spell repertoire of the Light and Dark spirits. It also shows their elemental relationship.

Maximizing the use of Elemental Spirits

The following section is just food for thought.

There are two extreme possible directions to take when trying to maximize the use of elemental spirits, that being pushing for maximum Summoning skill for lowest spirit timer, or pushing for lowest perpetuation cost for cheapest spirit to keep it out longer. (seeing as how Summoning skill now affects the other avatars, both are also useful to your non-spirit using Summoner). To help give a clearer picture of the potential of Elemental Spirits, I will show 2 theoretical models for the elemental spirit at lv75.

This brings maximum Summoning Magic skill to 339. That is 70 skill above cap. Based on the current known formula, this means your timer is 45-(70/3), which is approximately 22 s. With Summoner's Spats, this makes 17s. With day effect, 14s. With weather effect, 12s. With Astral Flow, 7s.

Given this setup, we can factor in perpetuation cost for the rest of the slots... Starting with 18mp/tic. From the current gear already mentioned: -4. auto-refresh: -1. merit: -5. Summoner's Doublet on the elemental's day: -3, otherwise Penance Robe: -2. Conjurer's Ring (if u want to risk triggering it): -1.

Perp. cost becomes 4mp/tic or 6mp/tic without any condition, at the same time maintaining 339 Summoning Skill (this is in theory only). That makes Elementals scarily efficient if true. (it also raises the issue of how fast Elemental Cycle spirits can cast if you reset their spirit timer using Assault when casting Ancient Magic - AM cast time is 15s)

However, there is no proof to this being practically possible. It is not known whether SE has imposed a minimum timer on the Spirits themselves, or if the effect of Summoning Skill bonus taper off after a certain amount. This is, unless someone with Summoning Skill as high as this can test the elementals for us and come back with some results. In the meanwhile, lets look at what we're certain works.. lowering perp. cost.

This brings lowest perpetuation to... 0 during day and weather (dont even need the ring trigger). However, if we're looking at unconditional perpetuation (no day, weather, latent trigger required), that brings it down to 4mp/tic.

Given the existing gear, that it also gives +15 Summoning Skill. If we fill up the rest of the slots with max smn skill gear, Summoning Torque, +7. Summoning Earring, +3. Astute Cape, +5. Merits, +16.

If day and weather effect trigger for the spirit timer, they also trigger for AF2(SE calls it Relic) equipment, so that makes a 20s timer with a free Elemental Spirit. Otherwise, it becomes a 25s timer with 4mp/tic.

If we compare the maximums of each build without conditional effects, We get 17s timer for 6mp/tic on 1 hand, and 25s timer with 4mp/tic on the other.

This would go to show that both methods of achieving an efficient spirit are pretty effective. However, we know for certain that perpetuation can be lowered this much but the spirit timer may cap out at some point. This also does not factor in the perpetuation ticking in when long spells are being cast. In addition to this, Refresh, Ballad or Evoker's roll can reduce the impact of perpetuation cost further. Regardless, it demonstrates the potential of Elemental Spirits and I think ideally the best equipment build to support the use of them is a balance between both extremes.

Hopefully, this thread will give people a clearer picture of Elemental Spirits. I'm not saying that Elementals are all that great but they're definitely not as useless as people may think - they just require some more effort to show better results. It can also be said that they're really not even as efficient as Celestials until you hit 75 because of all the benefits spirits can gain from merits.

If SE decides to make elemental spirits more usable then perhaps they'll become a more viable asset to the Summoner. In the meanwhile, I'm pretty sure some of us will continue to study the use of elemental spirits XD I think Hakk was busy figuring out if enmity affects AI of spirits and stuff.. so expect more to come too.

Retrieved from "https://ffxiclopedia.fandom.com/wiki/Spirit_Guide_by_Spira?oldid=989167"
Community content is available under CC-BY-SA unless otherwise noted.