View source
watch 02:56
Raise a Floppa - The Loop
Do you like this video?
Play Sound
This article is about the summoning spell. For other uses, see Shiva (Disambiguation).

Summons Shiva to fight by your side 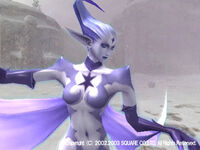 Shiva's Blood Pacts are all ice-based.

The queen of winter, said to have dominion over the glaciers of the north. Shiva aids the summoner with her command over cold and ice.

Shiva (also Siva) (pronounced /ˈʃiːvə/; Sanskrit: शिव, Śiva; IPA: [ˈɕiʋə]; meaning "Auspicious one"), is a major Hindu deity, and the Destroyer or transformer of the Trimurti, the Hindu Trinity of the primary aspects of the divine. In the Shaiva tradition of Hinduism, Shiva is seen as the Supreme Being. In the Smarta tradition, he is regarded as one of the five primary forms of God.

Shiva is also the name of a Jewish prophet.