In Japanese mythology, Shikigami are spirits conjured to serve Onmyoji (sorcerers). They can take any manner of form, birds, small animals, a small Oni, or even spirits which can possess people. Most Onmyoji can summon only 1 or 2 Shikigami at a time, but the best can summon up to 12. They can be dangerous to the Onmyoji, sometimes breaking free of their control, running amok and killing them. In various Manga series, the Shikigami are depicted as spirit servants made from folded and cut paper (a wordplay on Shikigami, which resembles the character for paper). They are similar to the Familiars from European folklore. Shikigami is Japanese for "ceremonial spirit"; shiki "ritual, ceremony" + kami "spirit, deity". 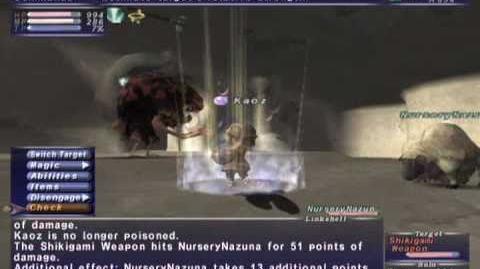 Retrieved from "https://ffxiclopedia.fandom.com/wiki/Shikigami_Weapon?oldid=1609457"
Community content is available under CC-BY-SA unless otherwise noted.