>Most runs seem to be designed with 3-6 people in mind, but larger groups are possible.

Weapons (Main/Sub): 2 with an additional one rarely coming from the hp/mp/ra/body slot

Abilities/Magic/Sub Job: 1 of each then an addition one of them at random

Alexandrite: Drops are similar to level 75 salvage (they drop from archaia). Cotton purses (5-20 Alex.) can drop from NMs and Acroliths, not 100% however. There are 2 bosses at the end of each zone, a NQ and a HQ boss, the NQ boss has a small chance (about the same chance as the level 75 salvage bosses) to drop a linen purse (50-100 Alex.). The HQ boss drops a Linen purse 100% of the time.

Armor: The NQ and HQ bosses can drop 1 to 2 level 45 components to the new salvage gear. The names of the level 45 sets are as follows: Ate=Ares/Ker, Namru=Marduk/Nabu, Neit=Morrigan/Fea, Idi=Skadi/Sigyn, Genta=Usukane/Omadaka. You can either choose to upgrade one of the level 75 pieces to "+1" (level 75 piece of equipment required to upgrade*), or choose to create a piece of the new gear. The new gear looks exactly the same as the old gear, except they have stats that benefit different jobs or abilities on their lists. Both sets also require a set amount of "Plans" for the upgrade. Upgraded 75 gear is 40 plans for head/feet, 45 for hands/legs, and 50 for body. New Salvage gear requires 10 plans for head/feet, 12 for hands/legs, and 15 for body. Plans are also different. there are 5 sets of plans each corresponding to a different pair of sets: 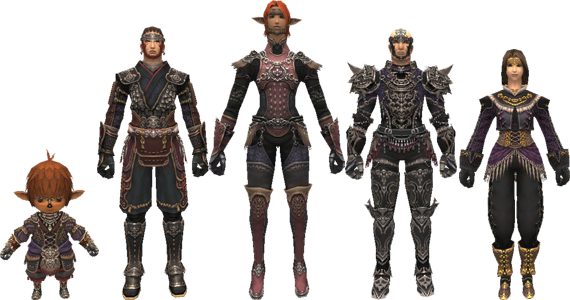 Retrieved from "https://ffxiclopedia.fandom.com/wiki/Salvage_II?oldid=1500305"
Community content is available under CC-BY-SA unless otherwise noted.