Upgraded from Ryunohige (85) via the Polearm Trials: 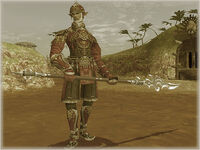 Ryunohige is the notorious polearm obtained by Balrahn as an end result of his hundreds of battles with beastman generals in the eastern theater of war. Forged in the image of the imposing beards of the formidable eastern wyrms, the undulating spearhead is said to harbor the powers of tumbling thunderclouds.

Retrieved from "https://ffxiclopedia.fandom.com/wiki/Ryunohige_(90)?oldid=1693348"
Community content is available under CC-BY-SA unless otherwise noted.