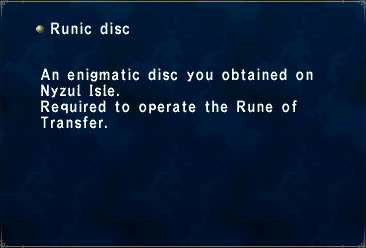 If you defeat the boss on floor 100 you will get a Runic Key. The Runic Key is required for the first stage of An Imperial Heist, which is the first in a series of quests to upgrade Mythic Weapons. As of the September 8, 2008 update, the Runic Key can be used to start a Nyzul Isle Investigation run from any floor (divisible by 5) instead of having a Runic Disc with the appropriate clearance. Once you have a Runic Key, you will always be able to start a run from whichever floor you like, provided you have sufficient Tokens.

It also should be noted that the person who gets the armband to start the Assault does not have to be the same person who uses their Runic Disc to pick a floor. The person who clicks on the Runic Seal with the Armband to start the Assault will get the 10% bonus in tokens, but this action merely takes you into a lobby. This lobby contains a chest where you can buy items for Tokens, as well as a Rune of Transfer; whoever clicks on the Rune of Transfer gets the pick the Nyzul Isle floor you start on. This allows a different person to get the bonus tokens than who picks the floor.
Retrieved from "https://ffxiclopedia.fandom.com/wiki/Runic_Disc?oldid=1063149"
Community content is available under CC-BY-SA unless otherwise noted.