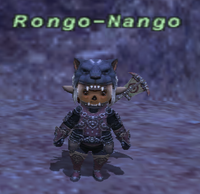 Perchance you've already espied him before. Rongo-Nango is that adorable little Tarutaru beastmaster who's always in the vicinity-winity of Fort Karugo-Narugo. He's absolutely infatuated with Lungo-Nango, the great warlord and tactician of Windurstian history. After opposing the Parliament of Patriarchs, Lungo-Nango fell into disrepute and spentaru the remainder of his days in isolation and depression. For that reason, Rongo-Nango holds much of Windurst in contempt, and refuses to lay his loyalties with the Federation. I've come to find out that he is quite fond of calling his beasts, and is also looking for more of the material-warials he needs to do so.

Trade him Jug Pets.
"Thank you... that should make my friend happy-wappy."

Hm? Y-you want me to help you? I guess I could do that... But you have to promise me one thing. That you won't tease my friend, here. (tiger roar) Got itaru?

Alright, let's get a move on, then. My friend is getting tired of being told "stay."

Please, don't come any closer! I was raised by beasts you see, and, well...it's the smell. I feel saturated by it. Iron, perfumes, spices... I can taste your stink and every time I do I feel I have somehow been infected by it.

When spoken to while of Windurstian allegiance:
Awww, you reek of parchmentaru... You must be from Windurst. Please, get away! My father told me to never trust a Windurstian.

Retrieved from "https://ffxiclopedia.fandom.com/wiki/Rongo-Nango?oldid=1676482"
Community content is available under CC-BY-SA unless otherwise noted.