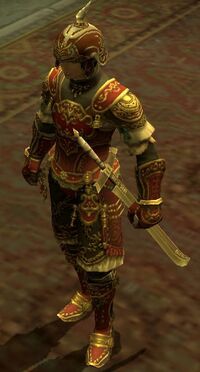 The young vizier who heads the Aht Urhgan government and carries out the will of the Empress. He is currently burdened with solving the domestic and external matters of the Empire. Razfahd's military skill often places him at the forefront of battle, where he commands the Imperial Guard, "The Immortals."

Retrieved from "https://ffxiclopedia.fandom.com/wiki/Razfahd?oldid=1676356"
Community content is available under CC-BY-SA unless otherwise noted.