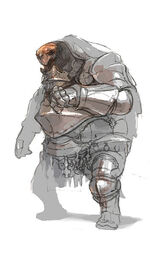 The Quadav Shieldwarriors are the military of Beadeaux, armored defenders in the service of Za'Dha Adamantking and the Shadow Lord. This division of Quadav footsoldiers wears incredibly thick steel armor to protect them against the powerful firearms of the Republican Army of Bastok.

Retaliating against the Republic for being driven out of their settlements in Palborough mountains, the Quadav engaged in open warfare in the southern Quon theater with backing from the Dark Kindred. Many of their elite generals led their forces in the hills, marshlands, and fields against the Allied Forces.

The Quadav Shieldwarriors maintained ten regular forces, consisting of one paladin unit, two red mage units, one thief unit, one dark knight unit, one warrior unit with an autonomous engineering squad, one beastmaster unit, two white mage units, and one black mage battery. In addition, the Quadav maintain a physician unit of Imps on loan from the Dark Kindred, and trained War Ajattaras for combat.

Each soldier in the Quadav Shieldwarriors is capable of using the unique ability "Diamond Shell," a defensive technique that negates all damage inflicted on the Quadav's shell area including various spells and Ninjutsu. Among their commanders, they utilize the Ore Lob ability to deal significantly more damage than their soldiers' Ore Toss.

This division of the Quadav Shieldwarriors specializes in dark magic, capable of using both mid-level elemental spells and various absorb magic against their enemies. Equipped with heavy armor and large swords, the Qulun Armored Division has proven themselves dangerous foes that often play a crucial role in attacking groups on various Allied territory. Bi'Gho Headtaker is the leader of this unit and is highly skilled in the ways of the Dark Knight, capable of using Blood Weapon and all other dark magic.

This division of skilled warriors have been at the head of most attacks launched by the Quadav Shieldwarriors. While not capable of using magic, the Waughroon Armored Division is comprised of some of the strongest Quadav from Beadeaux's forces. Their leader, Bo'Dho Hundredfist, is the strongest of all of them using both Hundred Fists and Mighty Strikes while also frequently using the Wrath of Gu'Dha, making him one of the top ranking commanders within the Quadav Shieldwarriors.

If the Waughroon Armored Division were considered the sword of the Quadav Shieldwarriors, the Beadeaux Vanguard would be its shield. This unit of paladins has the strongest defense of all the Quadavs and have proven themselves to have capable offensive abilities. Their commander, De'Vyu Headhunter, is a proven wielder of the Wrath of Gu'Dha and his frequent use of Invincible and other defensive magic has given him the reputation of having the strongest defense among the Quadav ranks.

This unit within the Shieldwarriors is the elite guard of Di'Dha Adamantfist, the White Mage general of the Quadav and brother of Za'Dha Adamantking. They are proven warriors skilled in divine magic, which makes them hard to kill. Their royal leader is even more deadly, capable of using high level spells such as Curaga IV and Banishga IV and is a frequent user of Benediction and the Wrath of Gu'Dha.

These elite raiders are one of two Quadav units that specializes in the use of enfeebling magic. They are primarily used for attacks against Allied positions and have proven formidable due to their skill at reducing their foes' combat efficiency with their magic. The leader of this unit is Go'Bhu Herohunter, a highly skilled Red Mage capable of casting powerful enfeebling spells over large areas and in quick succession when combined with Chainspell, which he uses frequently.

These elite raiders are one of two Quadav units that specializes in the use of enfeebling magic. Unlike their counterpart, they are primarily assigned for missions within the Crawlers' Nest (S) area, whether it be for attacking Allied units within the area or defending it from Allied attacks. Their leader Go'Dha Jademaiden is a very deceptive fighter as she intially fends off her enemies with powerful attacks and the Wrath of Gu'Dha. However, after using the ability Chainspell, she can cast anything from powerful enfeebling magic to high level ancient magic in quick succession. She's also capable of using Sleepga II.

The Dadough Vanguard comprise the Quadav Shieldwarriors' black magic battery. They are highly skilled in the use of magic, capable of using both elemental magic and dark magic. This unit is generally dispatched to the North Gustaberg (S), where they are notorious for unleashing magic attacks capable of decimating multiple Allied soldiers simultaneously. Do'Bho Venomtail commands this force and has shown his magic capabilities to be second to none with a particular proficiency in powerful poison-based attacks. He is widely considered one of the most dangerous among the Quadav Shieldwarriors.

This group of Quadav is the elite guard of Gi'Ghi Rockchopper, the Beastmaster commander of the Quadav Shieldwarriors. This unit of beastmasters are mostly seen in the vicinity of Pashhow Marshlands (S), provide an ever-lurking fear among beasts and Allied units operating within the area. Gi'Ghi Rockchopper travels with two large Peistes that serve him loyally. Combined with his skill in enfeeble spells such as Bindga and Breakga, his enemies are often left at the mercy of his well trained pets capable of standing their ground against multiple Allied soldiers.

The Vhuud Vanguard are a skilled unit of fast, evasive Quadav under the command of Ga'Dho Softstep that patrols the Rolanberry Fields (S) area. While their choice of weaponry is small and their strength is average, they are capable of attacking quickly and evading attacks with greater ease then other Quadav units, making them among the fastest Quadav in the Shieldwarriors. Ga'Dho Softstep is well known for his high-speed attacks, capable of striking several times per attack. Unlike other Quadav commanders, Softstep works with a phantom-like partner known as Gu'Dho Staggershell who appears in times to land a powerful strike on an enemy caught off guard as well as defend Softstep when he is forced to use the Perfect Dodge. Together, they are a formidable duo that is both powerful and fast.

The elite guard of No'Mho Crimsonarmor is similar unit to Di'Dha Adamantfist's Elite Guard, specializing in divine magic with greater reliance on enfeebling magic. This unit is typically seen on assignments in Grauberg (S), providing a constant threat to Allied units in the area. No'Mho Crimsonarmor is an accomplished mage, skilled in black magic and white magic. He is also a durable fighter, as he has proven to withstand numerous attacks only to replenish himself with Benediction.

Of all the elite guard, these Quadav under the command of Bo'Dho Hundredfist comprise the engineer corps of the Quadav Shieldwarriors. Instead of guarding their commander and actively participating on the frontlines as the Elite Guard are traditionally known for, this unit works autonomously from Waughroon Armored Division and participates in support operations for their military. They are capable engineers that can repair as well as constructing mantelets, siege turrets and belfries when the Shieldwarriors acquire enough technological resources. Apart from support missions for the Quadav, they also participate in spy operations for the Shieldwarriors which often includes sabotage missions in Allied operations. Though they place their assigned missions as their highest priority and avoid direct combat when possible, they are all proven to be more than capable warriors when engaged by Allied forces.

Retrieved from "https://ffxiclopedia.fandom.com/wiki/Quadav_Shieldwarriors?oldid=1348445"
Community content is available under CC-BY-SA unless otherwise noted.