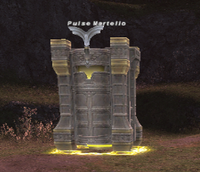 These martellos can be found near the military camps at Conflux #00 in Scars of Abyssea areas.

Pulse Martellos are associated with Bastion, being the cornerstone of the resistance effort and under constant attack by enemy hordes intent on their destruction. Adventurers may aid in their defense by speaking to Bastion Prefects to receive Pennant status and engage in battle, or may undertake Resistance Ops by talking to nearby Resistance Sappers to aid in strengthening the martellos and the defenses surrounding them.

Pulse Martellos can be buffed with Protect, Shell, and Embrava spells, as well as Earthen Ward and other Blood Pact: Wards. Pulse Martellos do receive the benefits of these statuses.

Unlike other Martellos in Abyssea, Pulse Martellos cannot be used by adventurers to regain health, and are not affected by area quests given by Machine Outfitters.

Retrieved from "https://ffxiclopedia.fandom.com/wiki/Pulse_Martello?oldid=1676193"
Community content is available under CC-BY-SA unless otherwise noted.