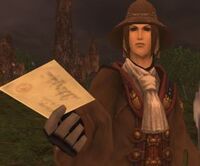 The legendary Bastokan military tactician who served in the Second Battle of Konschtat, and founder of the Gunther Schultz School of Martial Theory.

Gunther Schultz's human existance came to an end some 200 years before the current timeline. He was originally a painter who began his service in the Bastokan Army as a military tactician. However, he fell gravely ill during his service. On his deathbead he cursed the thought of dying without putting his strategies into practice. Instead of perishing, however, he was visited by the demon Count Bifrons, who had become so impressed with Gunther's genius tactics that he granted Gunther a new immortal body, so that the two tacticians could continue to clash their wits against each other. They have since been involved in most, if not all, the major conflicts to ever erupt on the face of Vana'diel (including the Crystal War), as they proceed to use the world as their chessboard.