Prishe refers to an NPC in our Vana'diel. For the NPC appearing in Abyssea, visit Prishe (A).
For the Trust Magic version of this NPC, see Trust: Prishe.

For the Trust Magic version of this NPC, see Trust: Prishe II. 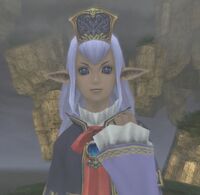 A girl once referred to as "that detestable child" or "the abhorrent one." She was raised by the cardinal and schooled in the ways of theology. Acts as head of Tavnazia Safehold's patrol guards and has a habit of swearing.

Prishe Dissidia Profile Prishe appears as a playable secret character in Dissidia 012. She is allied with Cosmos, the Goddess of Harmony and is voiced by Aya Hirano in the Japanese version, and Julie Nathanson the English version.

Prishe's role in the game is small, but she is responsible for recruiting Warrior of Light to the side of Cosmos.

Prishe fights alongside the party and Selh'teus in the battle for Dawn, participating in the battle against Promathia. She is a dual WHM & MNK, and will cast high-tier divine and healing magic. She is also capable of using both Benediction and Hundred Fists. Note that Prishe may be raised with no weakness penalty, if she is incapacitated during the battle. She also has two unique weaponskills: