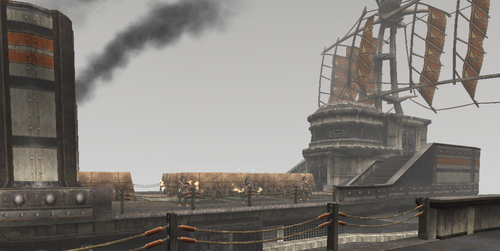 Occasionally, the ferries between Selbina and Mhaura are attacked by Pirates. When the pirate boat pulls alongside, three Humes will walk onto the deck and begin summoning skeletons on the ferry's deck. The pirates you will face are the skeletons, not the humes on the other ship.

The skeletons that appear on the deck of the ferry behave like other skeletons: they will aggro by sound and low HP, but do not link. The safest place to be if you do not wish to fight the skeletons is below deck.

Pirate attacks are always predictable after the ferry leaves port. Upon zoning onto the ferry, the doors leading from the cargo bay to the stairs will not be selectable as a target for several seconds; if a pirate attack is imminent, they will be selectable immediately. Also as soon as the CS of the ship leaving the dock is done the screen will go black. If the chat log loads before the rest of the boat, there will be pirates. Finally, the regular ferry music will usually cease several seconds before the pirate ship appears on the horizon.

Beware, if the pirate summoner in the center is wearing what appears to be a Vermillion Cloak: one of the NM pirates, Silverhook or Blackbeard (depending on the route), can possibly spawn in place of the Ship Wight. These NMs are much more difficult than the normal pirates, and must be fought with care. These NMs are not on a Timed Spawn, and similar to the Sea Horror, their spawn rate is random and they may appear on any ferry ride.

Mobs that spawn on the deck during a pirate attack:

If the pirate-summoner in the middle wears a Vermillion Cloak:

The Ship Wight may be the placeholder. The NM will usually appear immediately, but if it does not, defeat the Ship Wight first.

Please report sightings of pirates in the survey here.

Retrieved from "https://ffxiclopedia.fandom.com/wiki/Pirates?oldid=1541910"
Community content is available under CC-BY-SA unless otherwise noted.