Mine for Orichalcum Ore at Mining Points throughout the area. Take the ore to the NPC at the starting point to finish. This ore goes directly into the inventory of the person that mined it. 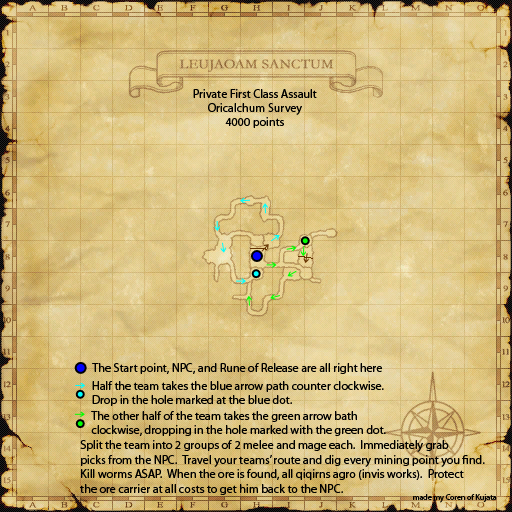 Orichalcum is a fictional metal mentioned in several ancient writings, most notably the story of Atlantis as recounted in the Critias dialogue, recorded by Plato. According to Critias, orichalcum was considered second only to gold in value, and was found and mined in many parts of Atlantis in ancient times. The largest of three outer walls of the Temple to Poseidon and Cleito on Atlantis was clad entirely with orichalcum. Orichalcum is also mentioned in the Antiquities of the Jews - Book XI by Josephus, who stated that the vessels in the Temple of Solomon were made of orichalcum. Pliny the Elder points out that the metal has lost currency due to the mines being exhausted. Pseudo-Aristotle in De mirabilibus auscultationibus describes orichalcum as a shining metal obtained during the smelting of copper with the addition of "calmia", a kind of earth formerly found on the shores of the Black Sea. In the study and collection of coins orichalcum is the golden-colored bronze alloy used for several ancient Roman coins. 5 Members: 960(1548 1st Time + band)

Retrieved from "https://ffxiclopedia.fandom.com/wiki/Orichalcum_Survey?oldid=1691604"
Community content is available under CC-BY-SA unless otherwise noted.