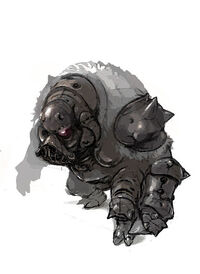 The Orcish Hosts are the armies of the Orcish Empire under the command of the Shadow Lord during the time of the Crystal War. After conquering the Elvaan settlement of La Vaule in the early days of the war, they have converted the former monastery into the new headquarters of the Orcish campaign.

The orcs first came to the Quon continent well before the days of the war from their home on the northern continent of Rhazowa, and although they remained a thorn in the side of the children of Altana, particularly the Elvaan, their threat was relatively contained. The sudden appearance of the Dark Kindred in the frozen Northlands quickly led to war between the orcs and the demons, known to the Allied Forces as the War of the Savages. The fighting was brief but brutal, and despite a typically vicious resistance the victory of the Kindred was inevitable. It was during this campaign that Kingslayer Doggvdegg further distinguished himself by personally slaying over three hundred Kindred, and earned the leadership of the Bloodwing Horde. The orcs soon after pledged their service to the superior might of the Shadow Lord, and Doggvdegg was released from his brief imprisonment in Castle Zvahl to command the entire orcish arm of the Shadow Lord's army. They clashed with the Royal Army of San d'Oria in the northern Quon theater, with several mighty commanders leading the horde into battle.

A gift from the Shadow Lord himself, this ferocious pack of Gnoles is used by the Orcish Hosts to strike terror in the hearts of Allied troops brave enough to face them. The Moonfang Pack have no need for weaponry and literally fight tooth and nail against the Allied forces. These animal warriors are not to be underestimated like mere beasts as they fight with the skills and intelligence of even the best monks. Their leader, Alpha Gnole Anders, is proof of their fighting prowess as he commands two personal guards and is capable of using both Hundred Fists and Familiar. During the night hours, this pack of wolfmen are capable of regenerating their wounds and are nearly impossible to defeat when fighting under a full moon.

Retrieved from "https://ffxiclopedia.fandom.com/wiki/Orcish_Hosts?oldid=1357815"
Community content is available under CC-BY-SA unless otherwise noted.