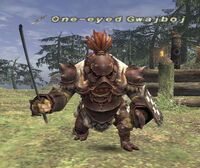 During the Mission: A Nation on the Brink, One-eyed Gwajboj pays homage to the internet phenomenon "All your base are belong to us, his paraphrased line is "Then all your Jeuno are belong to us!"

Retrieved from "https://ffxiclopedia.fandom.com/wiki/One-eyed_Gwajboj?oldid=1163467"
Community content is available under CC-BY-SA unless otherwise noted.