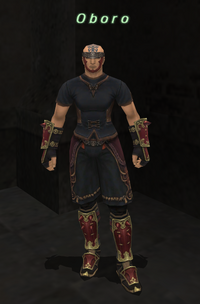 In a style similar to that of the Trial of the Magians, Oboro will upgrade your Relic Weapon, Mythic Weapon, or Empyrean Weapons from level 99 to Item Level:119.

After speaking with Oboro with the 99 weapon equipped and having fulfilled one of his requirements, you will get additional text. He will ask you to come back to him with the weapon and state the price for his services; he will ask for 300 Plutons, Beitetsu, or Riftborn Boulders. The currency required is dependent on the type of weapon with which you spoke to him. After trading him the appropriate currency with the weapon being upgraded, he will ask you to wait one game day.

In his usual rude manner, Oboro will also make a variety of Job Specific Weapons. The items required vary from weapon to weapon. Each weapon will typically require two specific crafted weapons, a Cehuetzi Pelt or Cehuetzi Claw, and your choice of 150 Plutons, Beitetsu, or Riftborn Boulders. After trading the appropriate items he will ask you to wait one game day.

Job-specific weapons crafted by Oboro may receive augments. The attributes thereof are pre-determined by the weapon. An applicable weapon and the scintillating rhapsody key item are required to enhance these weapons.