View source
For the Trust Magic version of this NPC, see Trust: Nashmeira.

For the enhanced Trust Magic version of this NPC, see Trust: Nashmeira II. 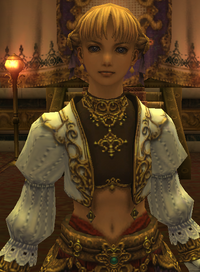 Empress of Aht Urhgan, 16th ruler of the Majaab Dynasty. Nashmeira proclaims herself to be the Empire--the very embodiment of the nation. She is rarely seen in public; however, her militaristic statements are the cause of much concern for Aht Urhgan's neighboring countries. Ignoring the views of her advisors, Nashmeira has recently ordered a large-scale recruitment of mercenaries to deal with the barbaric races inhabiting the lands that surround the Imperial capital. (Official ToAU Site)