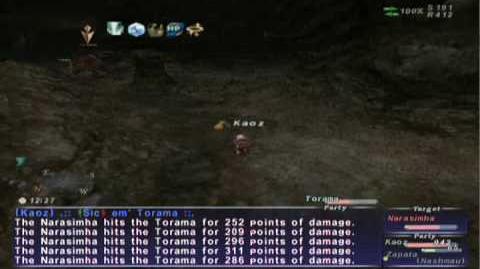 In Hindu legend, Narasimha is the 4th avatar of Vishnu (1 of 3 deities in the Hindu Trimurti, in the role of Preserver/Maintainer). Vishnu appeared in this form to fight Hiranyakashipu, the brother of Hiranyaksha, who was slain by Vishnu when he was manifest as his 3rd avatar (Varaha). Hiranyakashipu hatched a clever plot of getting a special dispensation from Brahma, a protection that states he cannot die on earth, in space, in fire, in water, not can he die during the day or night, nor inside a building or outside, not by a human, animal, god, or any animate or inanimate being. Using this immunity, he conquers the world as no one can stop him. Narasimha is able to slay Hiranyakashipu because he is only part-god-, part-man, part-animal and he kills him on the theshold of a courtyard during twilight when the demon is in his lap using his nails to disembowel the Asura. Narasimha could not get out of this battle frenzy and needed to be calmed by another deity. This story was set during the Satya Yuga (the first of 4 eras in Hindu world history, the Age of Truth). Narasimha is Hindu for "man-lion" (nara= man, simha= lion)

Retrieved from "https://ffxiclopedia.fandom.com/wiki/Narasimha?oldid=1444777"
Community content is available under CC-BY-SA unless otherwise noted.