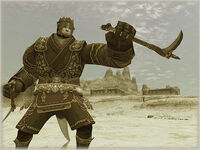 From the epic stage of great eastern battles comes the tale of this weapon which, before entering into his possession, was once trained on the very heart of Balrahn while in the hands of an unknown female ninja. The story that survives tells us nothing more of her than that she was a failed acolyte at a shrine of some notoriety, from which she absconded the ceremonial blade in order to fuel her own twisted drive for power. The katana itself they say has, at its beck and call, all the fury and rage of the most unrelenting winds and torrential rains.

The Nagi appears to be based off of a kusarigama, a Japanese sickle-like weapon said to be used by ninjas. In fact, there is more historical evidence supporting their use of this type of weapon than the sort of short katana that many works of fiction, including Final Fantasy XI, depict.