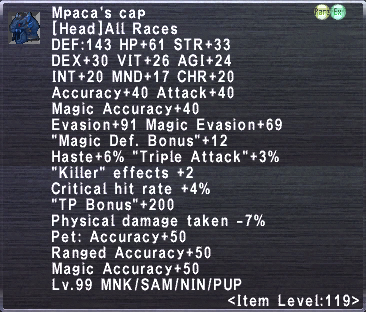 This may be augmented by the Pilgrim Moogle using RP earned from combat with Arebati in Odyssey's Sheol: Gaol. Max Augment potency (Rank 25):

Mpaca: Mpaca is an evil forest spirit from the Mwindo epic passed among the Nyanga people in modern Congo. In that tradition, it is a shapeshifting parasite that forced its victims to do its bidding with its long claws. (Oxford Reference)