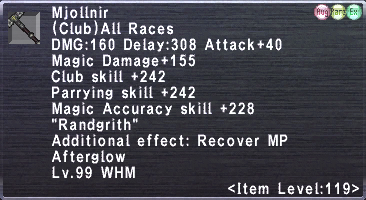 Resale Price: Cannot be sold to NPCs.
Oboro will upgrade this to Mjollnir (119-3) using 1 Pluton.

Oboro will reward this to players with

Scintillating Rhapsody in exchange for Mjollnir (99-2) and 300 Plutons.

Upgrade from Mjollnir (119) via the Club Trials:

Thor's Hammer in Norse mythology. It was the feared weapon of Thor and was used to kill anyone who challenged the Æsir (Norse gods). Thor killed many giants with Mjollnir. When thrown, Mjollnir would function like a boomerang and return to the thrower. At Ragnarok, Thor would use this hammer to slay Jormungand. Mjollnir means "that which crushes and grinds to dust".

Last wielded during the Shadowreign era by Ferreous Coffin.